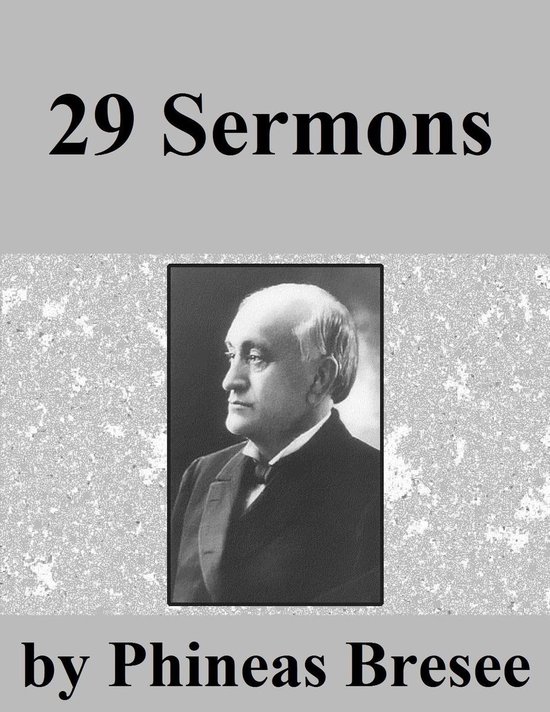 From the preface:
The earnest request has been made by many of God's people that a volume of Rev. Dr. P. F. Bresee's sermons be published, not alone for the refreshing and upbuilding of those who have had the privilege of sitting under his Pentecostal ministry, but also as an important addition to the holiness literature of the day. This expressed desire on the part of many of "the holy people" has been humbly responded to by the publication of the accompanying volume of his discourses.


Everyone, however, who has heard Dr. Bresee preach will readily understand that in order to receive the full import and power of his sermons they should be heard rather than read. In a remarkable degree the anointed personality of this servant of the Lord intensifies both the matter and delivery of his burning messages. So that to those who have heard this mighty preacher and felt the power of his impassioned utterances, there may be some lack both in the force and pathos of the printed discourses, especially as they are presented in a much abridged form. And yet because of the Holy Spirit's sign and seal — their Divine authorship — many readers will be able to enter into the themes, and even supply and understand the power of the unwritten words.


At a supreme epoch in the spiritual life of the author of these sermons, he was himself made "a minister and a witness" of the great dispensational truth which it has been his joy to proclaim ever since and which is so constantly emphasized in these discourses, namely, the baptism with the Holy Ghost, accomplishing in the hearts of believers today the self-same work as at the first Pentecost when He purified their hearts by faith.


May these sermons continue to preach and burn their way into the hearts of men, even to the uttermost part of the earth, by the power of the Holy Ghost under whose authorship and inspiration they have been prepared and preached, and to whose control and commission they are committed, is the prayer of ONE OF THE BLOODWASHED.

The Table of Contents are as follows:
Sermon 1: THE LAST COMMAND
Sermon 2: DIVINE POWER
Sermon 3: THE OUTSTRETCHED HANDS
Sermon 4: DAYS OF WAITING
Sermon 5: THE GREAT QUESTION
Sermon 6: THE PRINCE OF LIFE
Sermon 7: PERSECUTION
Sermon 8: DEATH AND LIFE
Sermon 9: THAT GREAT AND NOTABLE DAY
Sermon 10: ANNIVERSARY
Sermon 11: THE MIND OF CHRIST IN US
Sermon 12: "LO, I COME."
Sermon 13: THE TESTIMONY OF JESUS
Sermon 14: THE MOTIVE TO ENDURANCE
Sermon 15: THE CONQUEROR
Sermon 16: THE BLESSING
Sermon 17: STANDING FOR CHRIST
Sermon 18: THE LAW OF REPRODUCTION
Sermon 19: THE OPEN DOOR
Sermon 20: A MARVELOUS THING
Sermon 21: THE LIFTING OF THE VAIL
Sermon 22: THE TRANSFIGURING GAZE
Sermon 23: THE TRANSFERRED IMAGE
Sermon 24: THE CONQUERING WORD
Sermon 25: THE LAMB AMID THE BLOODWASHED
Sermon 26: THE GLORY OF A TRANSCENDENT PURPOSE
Sermon 27: THE HEAVENLY VISION
Sermon 28: CONSUMING FIRE
Sermon 29: ONE THING

About the author:
Phineas F. Bresee (1838-1915) was the primary founder of the Church of the Nazarene, and founding president of Point Loma Nazarene University.


He was an American- minister, and began his preaching career at the age of 18. He was converted and did his preaching in the Methodist Episcopal Church. This relationship was maintained until 1894, when a disagreement arose over how best to minister to the homeless in Los Angeles. This resulted in the birth of a then non-denominational ''Church of the Nazarene'' that later grew into a denomination with the same name in 1908.


Bresee maintained his pastorate in Los Angeles, California, until his health forced him to step down in 1911. He was a prolific writer, and also served as editor of the ''Nazarene Messenger'' for fifteen years.


His health continued to deteriorate following a bad car accident in 1900. Bresee passed away in 1915. Without a doubt, his legacy lives on in the Nazarene Church, and in the hearts of any seekers of holiness.