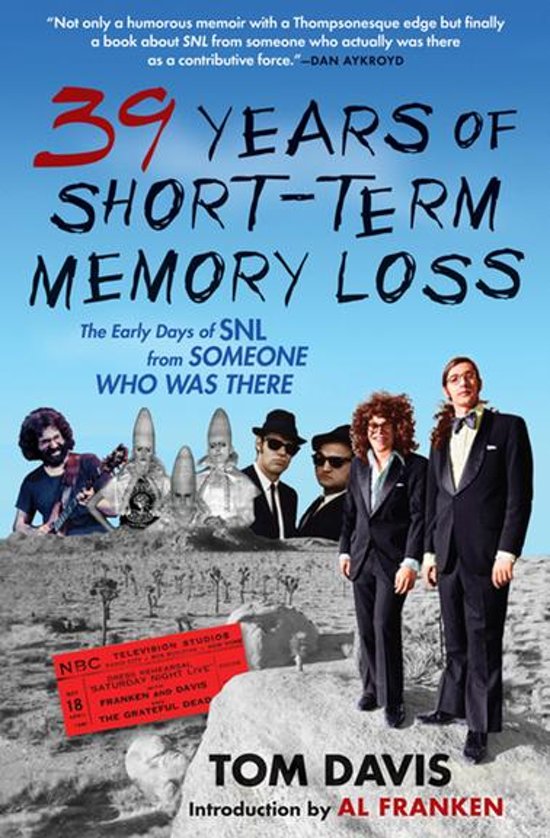 A memoir from the Emmy-winning Saturday Night Live writer that is "funny, spiky, and twistedly entertaining" (Entertainment Weekly).


39 Years of Short-Term Memory Loss is a seriously funny and irreverent memoir that gives an insider's view of the birth and rise of Saturday Night Live, and features laugh-out-loud stories about some of its greatest personalities—Al Franken, Lorne Michaels, Dan Aykroyd, John Belushi, Bill Murray, Michael O'Donoghue, and Chris Farley. Tom Davis's voice is rich with irony and understatement as he tells tales of discovery, triumph, and loss with relentless humor. His memoir describes not only his experiences on the set of SNL but also his suburban childhood, his high school escapades in the sixties, his discovery of sex, and how he reveled in the hippie culture—and psychoactive drugs—from San Francisco to Kathmandu to Burning Man over the last four decades. Hysterical, lucid, and wise, 39 Years of Short-Term Memory Loss is an unforgettable romp in an era of sex, drugs, and comedy.


"Though it features some lurid and hysterical SNL stories, Davis's memoir is less a backstage expose than a winning coming-of-age story featuring a funny Midwestern kid following his unlikely dream to the top." —Publishers Weekly, starred review

Tom Davis has written a book any fan of American comedy will enjoy. His mind remains keen, his comic insights penetrating, his natural humor and humane persona evident throughout. -- Dennis Perrin