A Dictionary of the English Language; In Which the Words Are Deduced from Their Originals, Explained in Their Different Meanings the Eleventh Edition Volume 1 of 2 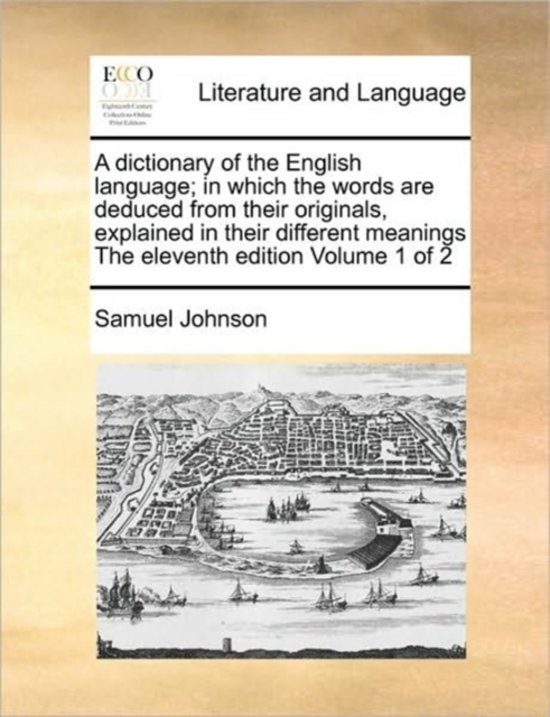 Samuel Johnson (1709-1784) was an English poet, essayist, critic, journalist, lexicographer, and conversationalist, regarded as one of the outstanding figures of 18th-century life and letters.  In addition to his Dictionary and the philosophical romance of THE PRINCE OF ABYSSINIA (1759, later known as RASSELAS), Johnson published essays in The Adventurer (1752-54) and The Idler (1758-60). He wrote a number of political articles, biographies of Sir Thomas Browne and Roger Ascham, and contributed to the Universal Chronicle.
Alles van Samuel Johnson
Toon meer Toon minder

The 18th century was a wealth of knowledge, exploration and rapidly growing technology and expanding record-keeping made possible by advances in the printing press. In its determination to preserve the century of revolution, Gale initiated a revolution of its own: digitization of epic proportions to preserve these invaluable works in the largest archive of its kind. Now for the first time these high-quality digital copies of original 18th century manuscripts are available in print, making them highly accessible to libraries, undergraduate students, and independent scholars.Western literary study flows out of eighteenth-century works by Alexander Pope, Daniel Defoe, Henry Fielding, Frances Burney, Denis Diderot, Johann Gottfried Herder, Johann Wolfgang von Goethe, and others. Experience the birth of the modern novel, or compare the development of language using dictionaries and grammar discourses. ++++The below data was compiled from various identification fields in the bibliographic record of this title. This data is provided as an additional tool in helping to insure edition identification: ++++British LibraryT122025Vol. 1 has half-title reading 'Johnson's Dictionary. New edition. 1799' and vol. 2 'Johnson's Dictionary. Vol. II. L-Z. New edition. 1799'. The register is continuous.London: printed for J. Johnson, C. Dilly, G. G. and J. Robinson, W. J. and J. Richardson, R. Baldwin and 21 others in London], 1799. 2v.; 8 "
Toon meer Toon minder