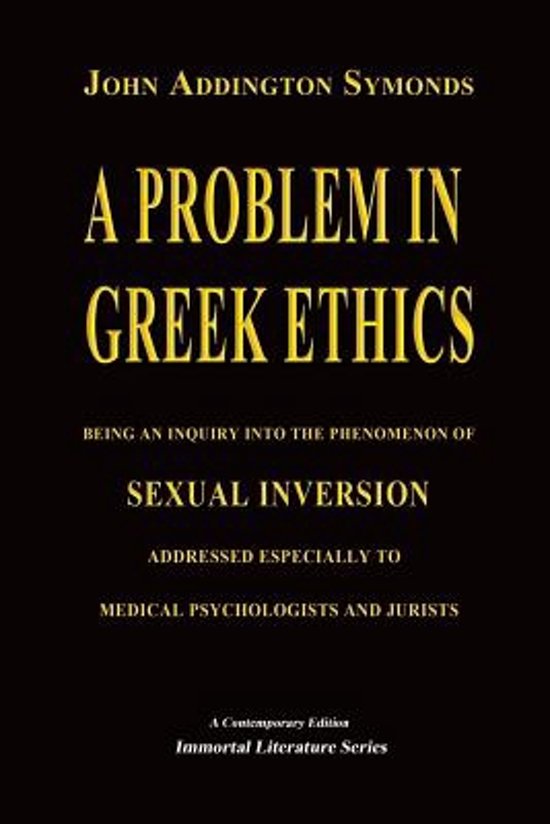 This is a new edition of “A Problem in Greek Ethics,” originally published in London in 1901 for “private circulation.” Part of the project Immortal Literature Series of classic literature, this is a new edition of the classic work published in 1901—not a facsimile reprint. Obvious typographical errors have been carefully corrected and the entire text has been reset and redesigned by Pen House Editions to enhance readability, while respecting the original edition.“A Problem in Greek Ethics” is an account of sexuality between men in all its forms, with Greek culture as a backdrop. Perhaps the best description of “A Problem in Greek Ethics” is this one in “Queer Religion” (Praeger, 2012, edited by Donald L. Boisvert and Jay Emerson Johnson, pp. 180-181): “Published at the turn of the century, ‘A Problem in Greek Ethics’ is a systematic and well-documented exposition of the role of homosexuality in the different historical periods of ancient Greek society. Throughout most of his work, Symonds prefers to use the term ‘paiderastia’ to ‘homosexuality,’ the latter a term he only uses in rare instances. Nevertheless, ‘paiderastia,’ in Symonds's work, amounts to a broad concept of homosexuality rather than to our current concept of pederasty. Whitman and his work are never mentioned by Symonds in ‘A Problem in Greek Ethics,’ but the conceptual connection had already been made explicit in Walt Whitman: ‘A Study’ eight years earlier. In the introductory lines to ‘A Problem in Greek Ethics,’ the reader is alerted that ancient Greece offers a unique example in history of ‘a great and highly developed race not only tolerating homosexual passions, but deeming them of spiritual value, and attempting to use them for the benefit of society.’ According to Symonds, while homosexual relations were not prominent in the so-called heroic age of Greece, it was nevertheless the love of Achilles for Patroclus, as narrated by Homer, that conferred in a later age of Greek history an almost religious sanction to the martial form of paiderastia. This episode in the Iliad inspired in later generations an ideal of manly love, which he describes as ‘a powerful and masculine emotion, in which effeminacy had no part, and which by no means excluded the ordinary sexual feelings.’ To which he adds that the tie created by these relationships was ‘both more spiritual and more energetic [than] that which bound man to woman.’ While Homer knew not about homosexuality, very early in Greek history paiderastia became a national institution giving rise, according to Symonds, to a distinction between a noble, spiritual, form of masculine passion, which he calls "heroic love," and a base and sensual one, which he identifies as ‘vulgar love.’”About the Author: John Addington Symonds was born in Bristol, England, in 1840. He was an English poet, an author of several works, and a literary critic. In 1873 he wrote “A Problem in Greek Ethics,” which discussed homosexuality between men. He printed ten copies in 1883, before effectively publishing the book in 1901. He was also known for his work on the Renaissance, as well as for his translations and biographies. He wrote “Our Life in the Swiss Highlands” (1891), biographies of Philip Sidney (1886), Ben Jonson (1886) and Michelangelo (1893), several volumes of poetry and essays, and a translation of the “Autobiography of Benvenuto Cellini” (1887). John Addington Symonds died in Rome in 1893. In 1896, Havelock Ellis published, in German, prepared with the collaboration of Dr. Hans Kurella, “Das konträre Geschlechtsgefühl” (Leipzig, by Georg H. Wigand's Verlag), later revised and published by Ellis as “Sexual Inversion”—the first medical text in English about homosexuality, which he had co-authored with Symonds, and which would become a part of Ellis’s six-volume “Studies in the Psychology of Sex.”
Toon meer Toon minder