A Seoul Miscellany Memories and Analyses, Critiques and Musings of Richard Pennington 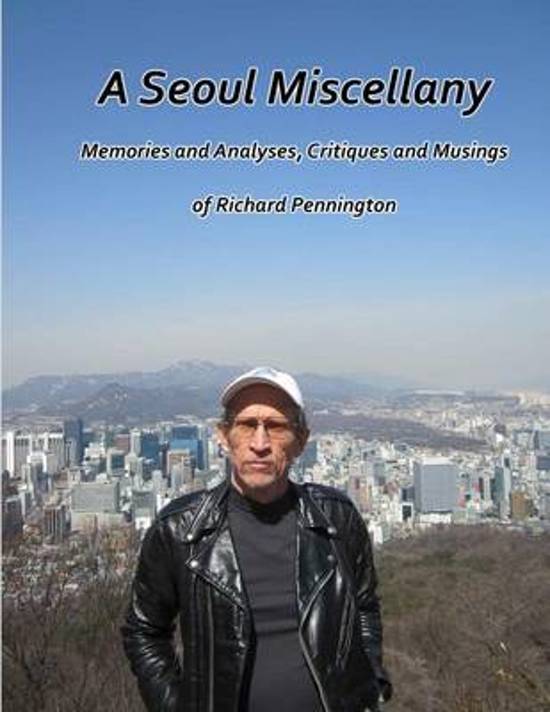 Richard Pennington, a walking, talking bundle of contradictions, characterizes the present tome as “part autobiography, part history book and part sociological treatise.” In this, his 20th book, he covers a lot of ground. Born and raised in Dallas, a graduate of the University of Texas and a long-term expat in Daegu and Seoul, he titles his first three chapters “Dallas Days,” “Austin Days” and “Korea Days.” (The others are “Excursions,” “More Autobiographica,” “Sports” and “Commentary on Other Matters.”) The 165 essays of this book contain recollections of ex-girlfriends, children he has loved, athletic success and failure, a near-drowning in 1962, a spinal fusion in 1970, a house fire in 1987, a 10-year running streak from 1983 to 1993, a big backyard project for a friend in the summer of 2003 and much more.Pennington tells us about some of the journeys he has taken, the experiences he has had in 62-plus years and the people he has met—the rich and famous, along with the sick, the poor, the homeless and a renowned cross-dresser; you might say he has friends in low places. We learn about his attitudes, his opinions, his biases and his effort to find equilibrium in a world full of dissonance. We see his fascination for sports along with his awareness of its corrosive influence on the college and pro level. Pennington, the product of a middle-class environment, has labored to put his background in some context.Time and again in this book, he champions people who have worked, sacrificed and led meaningful lives—for example, Martin Luther, W.E.B. Du Bois, Dr. Samuel Johnson, the man who faced down the tanks in Beijing’s Tiananmen Square in 1989, Rodney Page (never heard of him? read the book!), Hayden Fry, Marion Ford and James Meredith.From start to finish, our author makes clear that he holds no illusions about himself. He knows all too well that he has not set the world on fire, that he is seldom the smartest guy in the room, that he wasted several years after college and that he has had his share of setbacks. But do not think for a second that Pennington is some paragon of humility. He has no patience with those who lie and deceive (the former leaders of Enron, for example), those who have the opportunity to act but fail to do so (Darrell Royal), those who are responsible for the suffering of millions (Mao Zedong, Kim Jong-Il, et al.) or those who cannot respect an opponent (Muhammad Ali), and he does not hesitate to put the blast on them. Please, don’t get him started on political correctness (Ann Richards, Barbara Jordan, et al.). As a Protestant, heterosexual, European-American male, he is rather sensitive about that subject.This book might not have been written had he not lived in Korea for the past 7 ½ years. First as an English teacher at a private academy and then as an editor at an intellectual property law firm, he has forged a new and different life, rendering the term “home” somewhat nebulous. He has experienced first-hand the thrills as well as stress that come from living in a foreign country. Pennington has traveled all over the southern half of the peninsula, read voraciously about the country’s history and started an NGO that seeks to have an important cultural artifact (Jikji) returned from France. Numerous Koreans have said, in a joking manner, that he knows their history better than they do. Be that as it may, he has no plans whatsoever to return to the USA. The taegukki is sewn on the backpack he wears when exploring Korea.A Seoul Miscellany is Richard Pennington’s personal testament about his life and times. By turns bemused, angry, tender and perplexed, he writes about what matters to him. If this is not truth with a capital “T,” it’s nevertheless his truth.
Toon meer Toon minder