A Test of U.S. Civil-Military Relations Structural Influences of Military Reform on the Conflict Between Presidents and Senior Military Commanders During Times of War 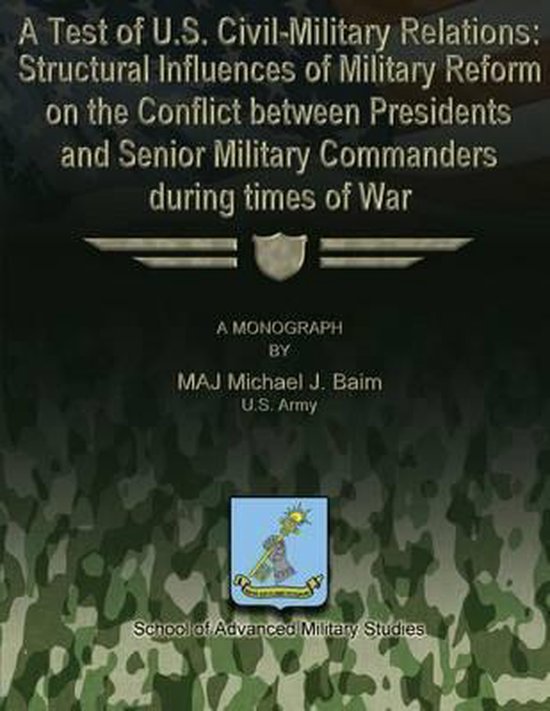 This study seeks to understand the influence of U.S. military reform on U.S. civil-military relations functioning within a zone of cooperation or conflict between political and military realms during times of war. It seeks to demonstrate how various efforts at organizational military reform have influenced the structural relations between the president and his senior military leaders, and how these structural reforms were not always designed to prevent civil-military relations from functioning in the zone of conflict. The conflict that structural reforms cannot prevent is typically based on policy differences between a president and his senior military commanders during times of war. The conflict is inherent in the nature of war as a political instrument. It often leads to the removal of the senior military commander due to a disconnect between the political objectives the president desires, and the military strategy designed to achieve those objectives. The national security structure established by reform does not guarantee cooperation, nor has it consistently prevented conflict in civil-military relations. Although military reform establishes the framework for key actors to function, it has not always been able to overcome the personalities of the individuals involved, or ensure policy agreements between the president and his senior military commander. The study uses a comparative case study methodology based on secondary sources to analyze the influence of national security structure on civil-military relations in the United States. It begins by outlining a broad theory of civil-military relations, and goes on to explain the national security structure at the time of three particular conflicts, the Civil War, the Korean War, and the Kosovo War. The three case studies selected for review are the Calhoun reform influences on President Abraham Lincoln and Major General George B. McClellan, the Root reform and National Security Act of 1947 influences on President Harry S. Truman and General of the Army Douglas MacArthur, and the Goldwater-Nichols influences on President William J. Clinton and General Wesley Clark.
Toon meer Toon minder