Acting for Film and TV -The Technique- EBOOK Tooltip Ebooks kunnen worden gelezen op uw computer en op daarvoor geschikte e-readers. Learn the technique of the best Hollywood actors, and all you need to do to become one of them 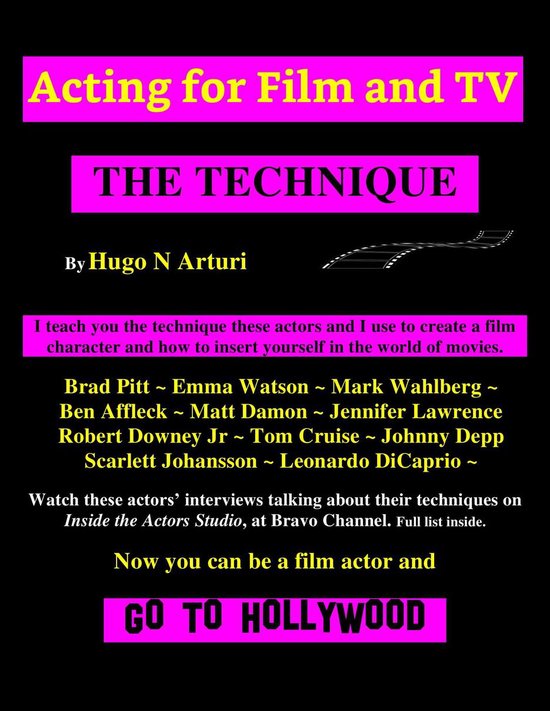 Mr. Arturi explaining to young people ''The Content of the Book''


Mr. Arturi: In the book you will learn the technique that I and the great Hollywood actors mentioned on the cover use to create a character for a movie and much more.


In the program ''Inside the Actors Studio'' on Bravo Channel these actors describe partially and briefly their techniques, you can watch the videos any time.


This technique is approved by the audience.


I explain you the technique in a very easy way, with all the essential elements and many details they don't mention.


You will learn to express your feelings through your eyes and not to fake them screaming or with bulky gestures.


You learn the technique from A to Z; that means, A is when you start reading the book, and Z is at the end of your training when you'll be ready to act the protagonist of a movie. Guaranteed!


THE WARRANTY: While you are training, you can watch the interviews of the actors and verify if it's what they comment.


You don't need acting experience, just a low-cost camcorder, the book and the desire to achieve it, that's it.


My students say that the drills are entertaining, fun and very easy to learn, there is nothing to study or memorize; you just read and simply film the practice scenes.


It takes 3 people to make an acting / filming team, 2 in front of the camera and one shooting the scene.


Also, I explain you an easy way to shoot scenes, as seen in movies, that even a child can do it.


Mr. Arturi adds: VERY IMPORTANT: my system allows you to learn the technique without a teacher, I give you the elements for self-control and correction; the ''why'' and ''how'' to do it is explained in the ''The John Travolta Test" chapter.


A young ask? What do I do after learning the technique? How do I become a professional actor?


Mr. Arturi: In the book I explain you the ESSENTIAL steps to enter the world of movies and be a successful actor; and MOST IMPORTANTLY, how to prevent the setbacks that inexperience could bring, and avoiding you spend years wandering and waiting for success; you would need years of experience to obtain it, as it happens to all new actors, but with it you will save all those years and complications.


Mr. Arturi concludes: You will not find stories, anecdotes, opinions, metaphors, unrelated issues or useless exercises to ''entertain'' you, which is what you find in most books on the same subject that they use as ''book fillers'', and in acting schools as "hour fillers'' for the lack of a solid technique to teach.


If you want or dream of being a Hollywood actor, my book gives you all the elements to achieve it. Guaranteed!


Mr. Arturi's challenge: I propose you to find in the world an acting school or a published book that contains 25% of the material contained in my book (you won't find it).


Mr. Arturi: if you do not want to be a professional actor, but would like to learn the technique, you can use it as the basis of a game to play with friends, as some of my students do, and according to them it is a very funny game to play, and adding more people it makes more fun


Then, to compete, your team will get in touch with other groups created in schools and universities.


Summarizing: This is your chance to learn the true Hollywood movie acting technique, save a lot of money, not waste years in acting schools, workshops or private teachers, and work as a professional actor in a short period of time.


I assure you it is worth it, you have nothing to lose and a lot to gain, try it!

Subtitel
Learn the technique of the best Hollywood actors, and all you need to do to become one of them