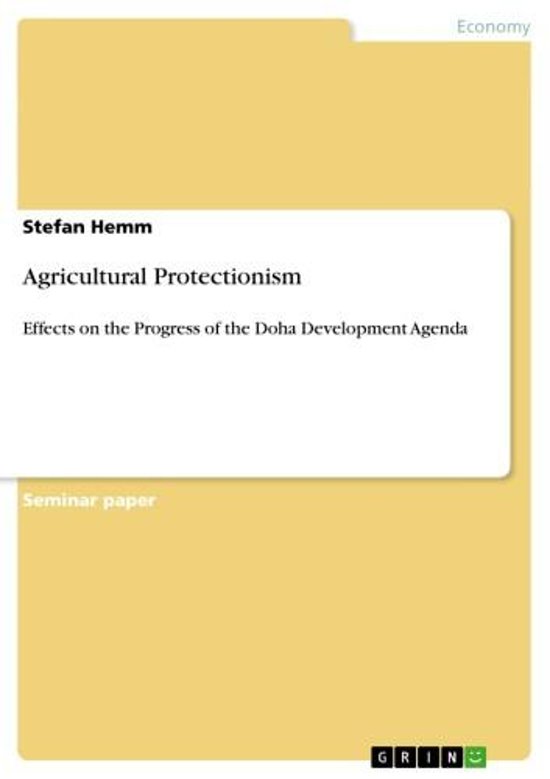 Seminar paper from the year 2011 in the subject Economics - International Economic Relations, grade: 1,3, Friedrich-Alexander University Erlangen-Nuremberg, language: English, abstract: Today we live in a globalized world and anybody can buy any product from any country in the world. But that is not completely true. Trade is not as free as many of us always think it is. There are still so many trade barriers which make international trade sometimes such an adventure. The World Trade Organization (WTO) was established to liberalize trade by reducing or eliminating tariffs and any other trade barriers. Therefore, all members have to contribute to that undertaking and make concessions. In the current round, named the Doha Development Agenda this does not work as it was meant to. A crucial issue in that conflict is agriculture. Developing countries and least developed countries complain about large amounts of subsidies paid by high-income countries such as the EU. In contrast, developed countries want developing countries to make concessions in terms of trade related intellectual property rights and trade related investment measures. So each country blames the other one instead of taking action and making the first step. This essay is structured into two main parts. The first part informs about some basics of protectionism and what happened so far in terms of agricultural liberalization. Chapter two gives a short overview of the existing types of protectionist measures to get a first impression how manifold opportunities for protectionists are. In this case, measures were divided into border measures and non-border measures. Chapter three informs about the outcome of the Uruguay Round, namely the Agreement on Agriculture to give an impression what was the state of WTO negotiations before the Doha Round started and what the impact of the URAA was. All previous rounds are not stated here because the Uruguay Round was the first round to achieve major results in liberalizing agriculture. The second part of the work describes the actual situation. Chapter 4 starts with the investigation why agricultural issues delay the Doha Development Agenda. Therefore, both sides, namely the developed countries´ view and developing countries´ view, are treated to deliver a balanced picture. Extent and gravity of agricultural tariffs and subsidies are explained in chapter 5. In chapter 6 the results of two major studies are presented to get an impression how much benefits are at stake for negotiation partners. In the last chapter I make some concluding remarks and try to give a future outlook how the fiasco of trade negotiation might be resolved.