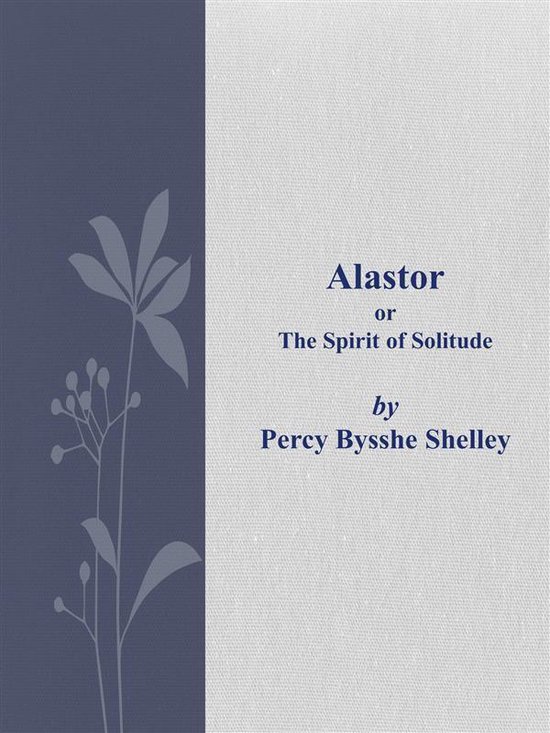 Alastor, or The Spirit of Solitude is a poem by Percy Bysshe Shelley, written from 10 September to 14 December in 1815 in Bishopsgate, London and first published in 1816. The poem was without a title when Shelley passed it along to his contemporary and friend, Thomas Love Peacock. The poem is 720 lines long. It is considered to be one of the first of Shelley's major poems.Peacock suggested the name Alastor which comes from Roman mythology. Peacock has defined Alastor as ''evil genius.'' The name does not refer to the hero or Poet of the poem, however, but instead to the spirit who divinely animates the Poet's imagination. In Alastor the speaker ostensibly recounts the life of a Poet who zealously pursues the most obscure part of nature in search of ''strange truths in undiscovered lands'', journeying to the Caucasus Mountains (''the ethereal cliffs of Caucasus''), Persia, ''Arabie'', Cashmire, and ''the wild Carmanian waste''. The Poet rejects an ''Arab maiden'' in his search for an idealised embodiment of a woman. As the Poet wanders one night, he dreams of a ''veiled maid''. This veiled vision brings with her an intimation of the supernatural world that lies beyond nature. This dream vision serves as a mediator between the natural and supernatural domains by being both spirit and an element of human love. As the Poet attempts to unite with the spirit, night's blackness swallows the vision and severs his dreamy link to the supernatural.Once touched by the maddening hand of the supernatural, the Poet restlessly searches for a reconciliation with his lost vision. Though his imagination craves a reunion with the infinite, it too is ultimately anchored to the perceptions of the natural world.Ruminating on thoughts of death as the possible next step beyond dream to the supernatural world he tasted, the Poet notices a small boat (''little shallop'') floating down a nearby river. Passively, he sits in the boat furiously being driven down the river by a smooth wave. Deeper and deeper into the very source of the natural world he rushes. Like the water's surface supports the boat, the supernatural world ''cradles'' the mutability both of nature and of man.