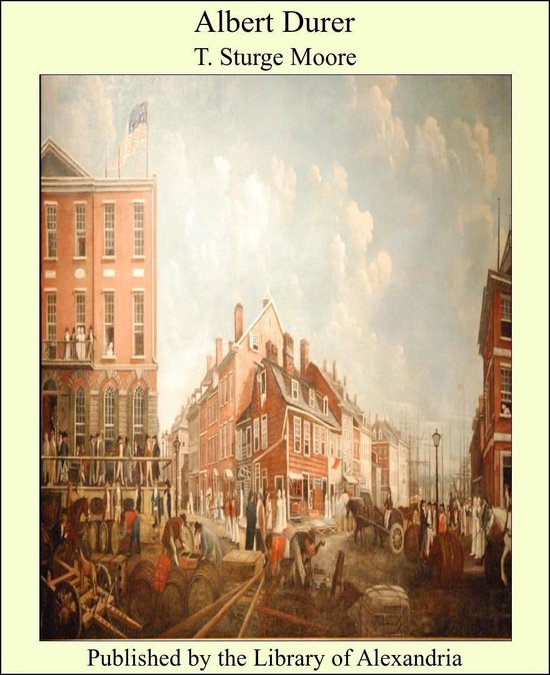 When the late Mr. Arthur Strong asked me to undertake the present volume, I pointed out to him that, to fulfil the advertised programme of the Series he was editing, was more than could be hoped from my attainments. He replied, that in the case of Dürer a book, fulfilling that programme, was not called for, and that what he wished me to attempt, was an appreciation of this great artist in relation to general ideas. I had hoped to benefit very largely by my editor's advice and supervision, but this his illness and death prevented. His great gifts and brilliant accomplishments, already darkened and distressed by disease, were all too soon to be utterly quenched; and I can but here express, not only my sense of personal loss in the hopes which his friendly welcome and generous intercourse had created and which have been so cruelly dashed by the event, but also that of the void which his disappearance has left in the too thin ranks of those who, filled with reverence and enthusiasm for the great traditions of the past, seem nevertheless eager and capable of grappling with the unwieldy present. Let and restricted had been the recognition of his maturing worth, and now we must do without both him and the impetus of his so nearly assured success. The present volume, then, is not the result of new research; nor is it an abstract resuming historical and critical discoveries on its subject up to date. Of this latter there are several already before the British public; the former, as I said, it was not for me to attempt. Nor do I feel my book to be altogether even what it was intended to be; but am conscious that too much space has been given to the enumeration of Dürer's principal works and the events of his life without either being made exhaustive. Still, I hope that even these parts may be found profitable by those who are not already familiar with the subjects with which they deal. To those for whom these subjects are well known, I should like to point out that Parts I. and IV. and very much of Part III. embody my chief intention; that chapter 1 of Part I. finds a Further illustration in division iii. of chapter 4, Part II.; and that division vi., chapter 1, Part II., should be taken as prefatory to chapter 1, Part IV. Should exception be taken to the works chosen as illustrations, I would explain that the means of reproduction, the degree of reduction necessitated by the size of the page, and Other outside considerations, have severely limited my choice. It is entirely owing to the extreme kindness of the Dürer Society--more especially of its courteous and enthusiastic secretaries, Mr. Campbell Dodgson and Mr. Peartree--that four copper-plates have so greatly enhanced the adequacy of the volume in this respect. I have gratefully to acknowledge Sir Martin Co nway's kindness in permitting me to quote so liberally from his ''Literary Remains of Albrecht Dürer,'' by far the best book on this great artist known to me. Mr. Charles Eaton's translation of Thausing's ''Life of Dürer,'' the ''Portfolios of the Dürer Society,'' and Dr. Lippmanb ''Drawings of Albrecht Dürer,'' are the only Other works on my subject to which I feel bound to acknowledge my indebtedness. Lastly, I must express deep gratitude to my learned friend, Mr. Campbell Dodgson, for having so generously consented, by reading the proofs, to mitigate my defect in scholarship