Alice and Me An Alice Springs Experience 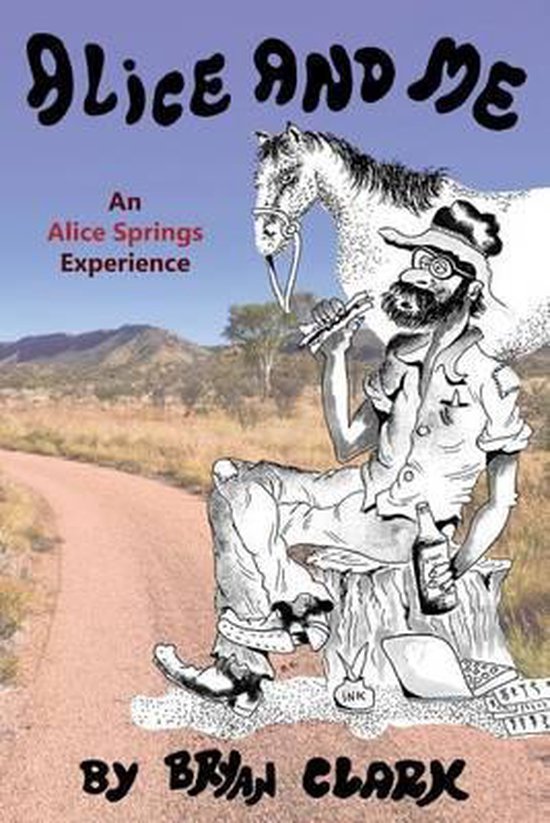 From the Introduction:
Having survived over seventy years of life in this land, I have at various times stood with my back to Australia - at Seaford, Scarborough, Townsville and Darwin - and in each place I have felt the bulk of the country behind me like the hand of a protective parent: huge, ancient, wild and inhospitable.
I have felt the sharp coldness of the waves in southern climes, the affectionate warmth in sub-tropical waters as brilliant sunsets perished over western oceans, the almost foreign loneliness of western islands with their petroglyphed rocks, and always in the background the hot breath of inland deserts gasping, yet beckoning.
I have wandered lost on horseback for several days in Arnhem Land eating the mullabungor (freshwater mussels) shown to me by the Ritarrngu Aborigines of the Roper River region, chewed the watery stalks of water lilies from the billabongs such as Yallawarra, and looked as a privileged stranger on the timeless cave paintings of Burrunjor where few, if any, white men have ever ventured.
I have loitered in exotic cities - Hong Kong, Tokyo - and seen my red-bearded strangeness reflected in the eyes and on the faces of other cultures, then winged my way back to Sydney to feel the strangeness all over again in the midst of my sport-fixated, grog-swilling countrymen who have rarely faced drought, thirst, - or fought wars that were not those of England or the USA.
I have seen impoverished Chinese villagers cultivating the strips of imported soil between railway tracks to grow household vegetables, and later wondered as I flew over the illimitable expanses of our Northern Territory which no man occupies or cultivates.
I have relished wild watermelons along the Wilton River, near south-western Arnhem Land, delighted in wild mangoes and coconuts and paw paws on the lovely beaches of the north-western coast of Western Australia, hunted big crabs for lunch with a wire spear in the Arafura Sea, helped paint the bodies of young initiates for a sacred Yabuduruwa corroboree, using sugar and water for glue, tail fluff from wild geese, white and red ochres and even human blood.
I have played the didjeridu on distant streets of the planet, in concert halls, schools and university auditoriums, on television and radio, even in a palace, and seen its vibrations energised in the wondrous, multi-coloured eyes of crowds who were totally ignorant of its origins in a Great South Land.
I have huddled under a tarpaulin in torrential rains with nary a dry stick to start a campfire, and sweltered on northern beaches with my Milingimbi friends, Wynyamarra and Ngulupani, swatting mozzies all night long in a sweaty tropical vacuum.
On an isolated north-western river bank I have touched the bones of men protruding from the arid red earth, some with bullet holes through the skulls, while over one shoulder was the deteriorating homestead of an early settler who came to tame the land and was himself tamed by hopelessness and a waterless river.
I spent sixteen years in the north-west of Western Australia as a newspaper editor, contending continually with village mentalities, the soaring egos of little men, and the cruel death of my wife far removed from her beloved Pennsylvanian hills.
I finally stopped travelling, far away from the sea, in the middle of Central Australian deserts where everything craved water and lay in wait of it over long and thirsty months; then came the sudden awakening, the budding of dormant weeds, the juices of life surging through lethargic gumtrees, and wildflowers flaunting their brilliant colours where once death had reigned unchallenged.
And so I came to Alice Springs...
Toon meer Toon minder