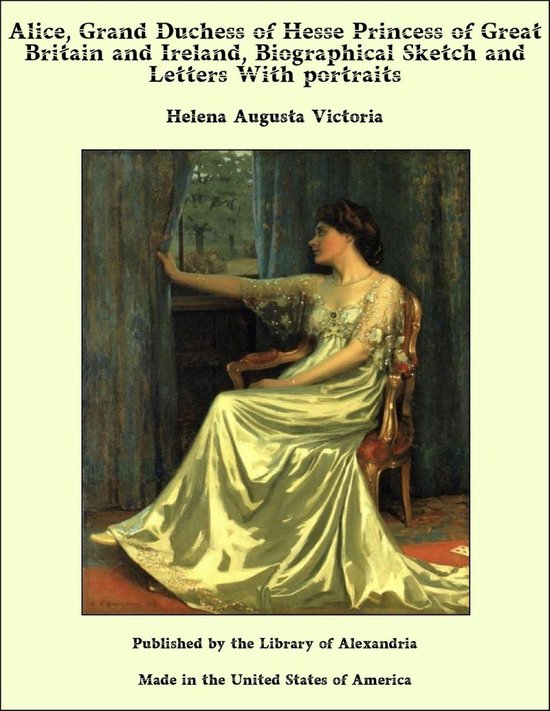 PRINCESS ALICE, as she is ever called in England, was born at Buckingham Palace on the 25th of April, 1843. She was the third child and second daughter of Queen Victoria and Albert, Prince Consort. At her christening, which took place at the Palace on the 2d of June, she received the names of Alice Maud Mary. Princess Sophia Matilda of Gloucester, niece of King George III., and sister-in-law to the Duchess of Gloucester, was one of her godmothers, and her Royal parents chose the name of Maud, which is the same as Matilda, on account of its being an old English name borne by the Empress Maud, and other British princesses. The name of "Mary" was chosen because the little princess was born on the Duchess of Gloucester's birthday. The Archbishop of Canterbury officiated at the christening. The sponsors: the reigning King of Hanover, Ernest Augustus; the Hereditary Prince of Saxe-Coburg and Gotha; Princess Sophia Matilda of Gloucester, sister-in-law to the Duchess of Gloucester, niece of George III.; and Feodora, Princess of Hohenlohe-Langenburg, half-sister to the Queen. The christening was, as the Queen herself told her uncle, the King of the Belgians, when writing to him on the 6th of June, "a very imposing ceremony. Nothing could have gone off better, and little Alice behaved extremely well." Though twenty-two years only have passed since the wholly unexpected death of Prince Albert deprived the Queen of her devoted husband, the Royal children of a most loving and beloved father, and the whole nation of one of its wisest counsellors, his life, in the admirable biographical memorial by Sir Theodore Martin, forms already part of history, and by it we are enabled to form a just estimate of the perfect character and great intellectual abilities of the Prince, whom his daughter, Princess Alice, revered through life as her highest ideal. Prince Albert, the second son of the then reigning Duke of Coburg, was the very picture of manly chivalrous beauty. He was very young, not yet twenty-one years old, when he became the Consort of the Queen of England, who was only three months older. But by his strength of character and rare energy of intellect, combined with a thorough self-control and an unswerving devotion to the duties of his position, he succeeded in gaining the love and esteem of a nation which, though it keeps watch over its rights and privileges with peculiar jealousy, knows also how to show great generosity, when once it has learnt to trust and to love. With his wonderful power of mastering new and difficult subjects he made himself familiar with the history and policy, the social and agricultural conditions, the industries and commercial relations of his adopted country. In his position of intimate confidential adviser to the Sovereign he showed the greatest tact, and gained the affection and respect of the Ministers who succeeded one another at the head of affairs; whilst the more he became known the more his genuine worth was appreciated by the nation at large. Chief of all, two nations have acknowledged with grateful admiration, that under his influence there grew up in the midst of the most brilliant Court in Europe a domestic family life, so perfect in its purity and charm that it might well serve for a bright example to every home in the land. Whilst sharing with the Sovereign all the labors and cares of state, the Prince made suitable changes and practical arrangements in the Royal Household, and, by steadily adhering to principles which he had at once recognized as the best, he succeeded in making life happy and peaceful to all around him. Thus it was that the Royal Family of England, whether residing in the splendid palaces at Windsor, in London, or at Osborne, the lovely country seat in the Isle of Wight, or at Balmoral, surrounded by the sterner scenery of the Scotch Highlands, was enabled to enjoy a life of perfect tranquillity amidst the political tempests of the most turbulent decade of our times.