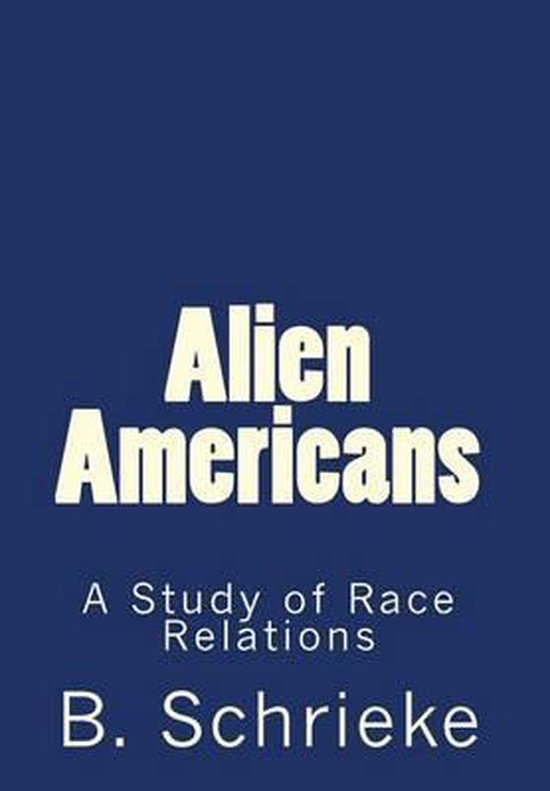 Alien Americans:A Study of Race Relations (1936) Introduction In 1933, while I was still in Java, the Board of Trustees of the Julius Rosenwald Fund invited me to come to this country in order to make a study of Negro life and education, especially in the Southern states, on the basis of my extensive but quite different experience with education and race relations in the Orient. Although fully realizing the difficulties involved in this assignment, I gladly accepted the invitation. After being graduated at the University of Leiden as a doctor of Oriental philology, and after spending nearly eighteen years in the Dutch East Indies as an officer in the Bureau of Native Affairs, as Assistant Commissioner of Native Affairs, as Director of the Museum in Batavia, as Professor of Social Anthropology and Sociology at the University of Batavia, and finally as Secretary of Education and Religious Worship for the Dutch East Indies, I felt that a stay in the United States would be highly instructive to me. Although the problems the Board wished me to study were entirely foreign to me, since I had never visited the United States nor had I ever met an American Negro, the Board regarded these handicaps as an advantage, as a guarantee of unbiased opinion. Before leaving for the United States I visited the libraries of the International Labour Office and of the League of Nations in Geneva, and the Bibliotheque de Documentation Internationale Contemporaine in Paris, in order to get some acquaintance with the subject. On September 15, 1934,1 arrived in New York and at once proceeded to Chicago, where I spent a few weeks in reading and adapting myself to the language, people, manners, and customs. It was necessary for me not only to study the Negro situation, but, in order to understand as fully as possible the peculiar character of these problems, also to become familiar with the American background and the American reaction to bi-racial situations other than Negro-white. My study was confined to the continental United States. The Hawaiian Islands, American Samoa, the Philippine Islands, Guam, Alaska, the Virgin Islands, and Puerto Rico are excluded from this survey. The months from October 1934 until May 1935 were employed in travel and observation. I spent most of my time in the cities of New York, Washington, and Boston, and in the states of Virginia, North Carolina, Georgia, Tennessee, Arkansas, Louisiana, Oklahoma, New Mexico, and California. Visits— some of them extending over several days—were paid to Bay St. Louis and Jackson in Mississippi; Tuskegee, Alabama; Charleston, South Carolina; parts of Arizona; and to Harvard and Yale Universities. Everywhere I found the kindest reception and hospitality. Everyone was eager to give me the information I wanted and to bring me in touch with those who were regarded as the best authorities on the subject. On the first of May I was back in Chicago, and spent the period until September writing this report. I have based my conclusions upon personal observation, upon conversations with persons intimately connected with the problems studied, and upon wide reading of authoritative literature in the field in order to check the accuracy of my impressions and to avoid mistakes or misrepresentations. I have refrained, however, from the use of footnotes referring to the literature: for the scholar they seem superfluous; for the general reader they are only tiresome and distracting. The literature mentioned at the end of the book is not an exhaustive bibliography, but is simply a testimony of gratitude on my part to those authors to whom I feel most indebted for the understanding of the problems which are touched upon in this report. In concluding this introduction, I want to thank the Board of Trustees of the Julius Rosenwald Fund for the great opportunity it has given to me and for the independence and freedom it has allowed me in forming my impressions and expressing them.
Toon meer Toon minder