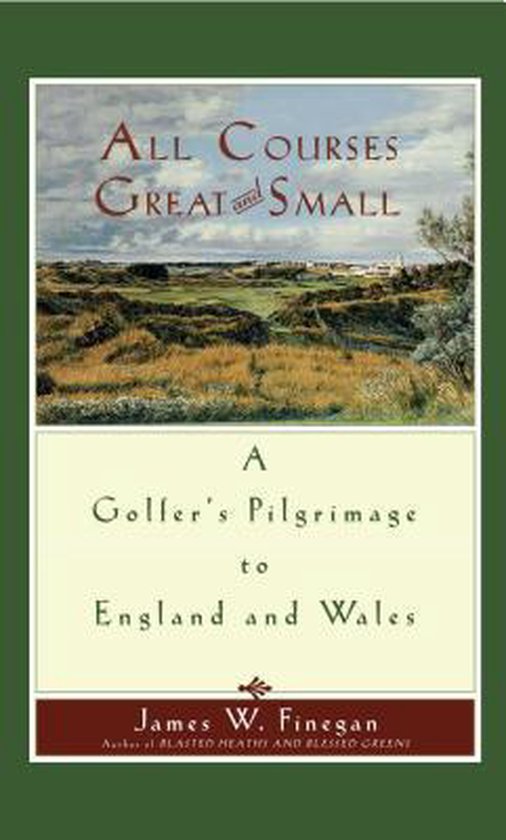 Every golfer dreams of making a pilgrimage to the British Isles, and it sometimes seems as though every golfer is in fact making that pilgrimage, especially when you're trying to book a tee time. The legendary courses of Scotland and Ireland are magnificent shrines, but their fame has obscured the greatness of the golf to be found all across the landscape of England and Wales.

From the heathland in the north and center to the linksland on the coasts, England and Wales present an extraordinary variety of great golf experiences. In All Courses Great and Small, James W. Finegan treats the reader to a countries-wide survey of these golfing delights -- some famous, like the Open Championship venues of Royal Birkdale, Royal Lytham & St. Annes, and Royal St. George's; some well known, like Sunningdale, Wentworth, and The Belfry; and some gems that have long been hidden in plain sight, like The Addington (in suburban London) or Southport & Ainsdale (not ten minutes from Royal Birkdale). There are as many outstanding courses in England and Wales as there are in Scotland and Ireland combined, a shocking fact that is easily explained: While Scotland has 5.2 million people and 550 golf courses, and Ireland has 3.5 million people and 400 courses, England and Wales have 50 million people and more than 2,000 courses.

Finegan provides a charming guide to the courses and the towns, the inns and the eateries to be found along the way. He highlights the best of the not quite four thousand holes in Blackburn, Lancashire; gives advice about lunch after your round at Sandwich; raises a cup of grog at Gog Magog; and tackles the playing and pronouncing problems posed by Pwllheli. He gives full due to the best-known places such as Rye, Wentworth, Hoylake, and the royals, but he also declares such lesser-known treasures as St. Enodoc, Silloth-on-Solway, Southerndown, and Pennard to be every bit as worthy of your time and attention. His books on the courses of Scotland and Ireland, Blasted Heaths and Blessed Greens and Emerald Fairways and Foam-Flecked Seas, have become invaluable companions to thousands of travelers; All Courses Great and Small is an irresistible and even more essential addition to the touring golfer's shelf and suitcase.
Toon meer Toon minder