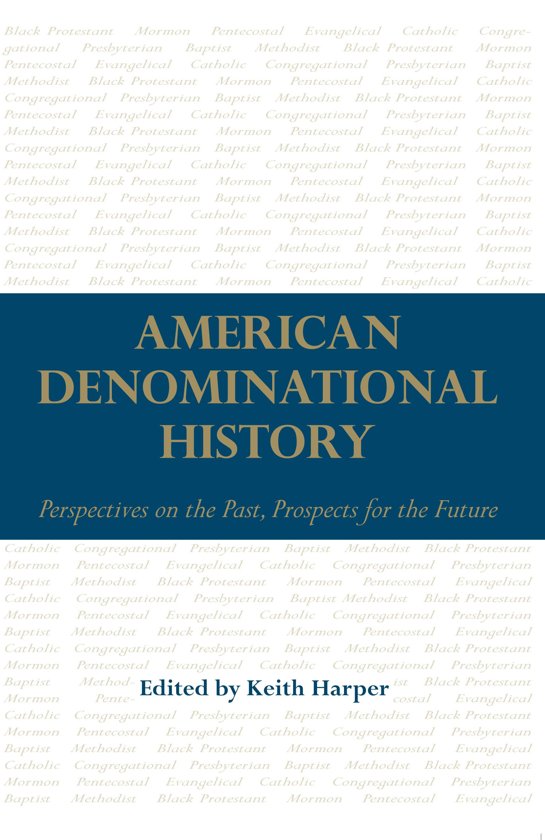 This work brings various important topics and groups in American religious history the rigor of scholarly assessment of the current literature. The fruitful questions that are posed by the positions and experiences of the various groups are carefully examined. American Denominational History points the way for the next decade of scholarly effort.

This collection of scholarly essays by church historians focuses on the history of Christian denominations within the United States. Inspired to update William Warren Sweet's Religion on the American Frontier, published between 1931 and 1946, editor Keith Harper expands Sweet's original coverage of four denominations (Congregationalists, Presbyterians, Baptists, and Methodists) to include essays on Catholic and Mormon historiography and on Black Protestant, Pentecostal, and Evangelical religious movements. Each essay discusses recent research and publications and has extensive bibliographical notes. This is a good starting point for the study of denominational history. -- Congregational Libraries Today The main contribution of this misleadingly titled volume is in updating historiography. In fact, 'American Denominational Families: Updating Their Historiography' would have been a more useful title. Denominational history has not been neglected to the degree that this book indicates. The updated items (mentioned in the text and endnotes) vividly illustrate this observation. The 'families' covered are Congregational, Presbyterian, Baptist, and Methodist. Catholics, black Protestants, Mormons, Pentecostals, and Evangelicals hardly represent denominations. In addition, Mormons are simply another world religion, emerging from Christianity just as Christianity emerged from Judaism. George Marsden's and Martin Marty's multiple works on Fundamentalists and Evangelicals are far more useful than these brief chapters. The numerous excellent local histories that deal with individual denominational churches are not even mentioned. Perhaps the most useful chapter is 'Black Protestantism, ' though it includes a variety of denominations. The volume includes full notes, but unfortunately no index or central bibliography. In its present form, it is useful only to remind readers of the many works that have been written about some denominational families.Summing Up: Not recommended. CHOICE
Toon meer Toon minder