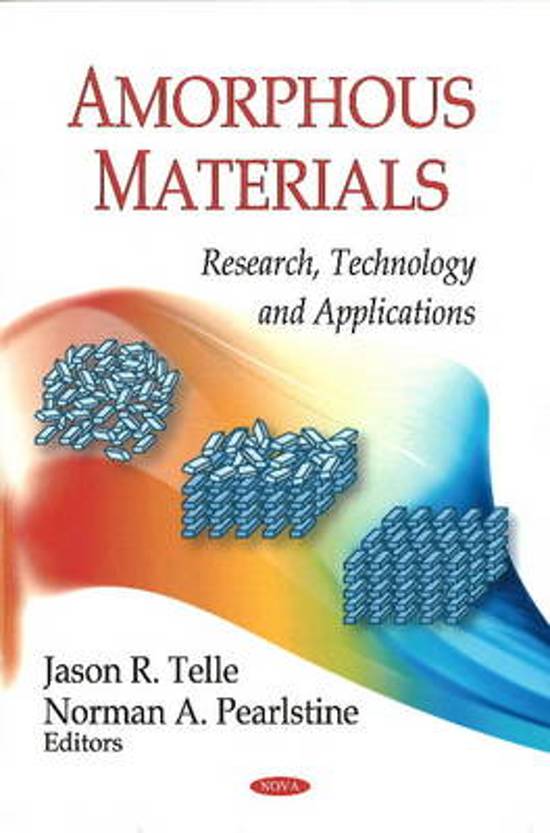 Amorphous materials, also known as soft glass, lack a definite form. Computer modelling of liquid and amorphous metals has a rather long history. Due to computer facilities progress, possibilities of construction of adequate model of liquid or amorphous metal have considerably increased. New results and also some problems that have arisen in the literature are discussed in this book. In particular, problems of ambiguity of correlation structure- interaction potential, topological aspects of structural characteristics of non-crystalline system and feature of diffusion in amorphous systems are discussed. Bulk metallic glasses (BMGs) have enabled the measurements of various physical as well as mechanical properties that were often impossible. Thermal expansion is one of the most important thermodynamic characteristics and is strongly correlated to the amorphous structures of metallic glasses. Thus, the relationship of fragility and dilatation with glass-forming ability of Pr-based bulk metallic glasses are explored. Phase-change memory technology is based on the high speed reversible amorphous-to-crystalline transformation of a thin film material and utilises the difference in the optical or electrical properties between both states. In this book, stoichiometric and eutectic doped with additional elements (oxygen and nitrogen) films, having amorphous and crystalline structures, are reviewed. In addition, the influence of phase-change material composition on amorphous phase stability, crystallisation temperature, crystallisation rates, optical and electric contrast are discussed. The solid-state characteristics play an important role during the development and manufacture of medicinal products, because they may influence the effectiveness, stability as well as the processibility of pharmaceutical systems. The amorphous state is critical in determining the solid-state physical and chemical properties of many pharmaceutical dosage forms. The main reason of the growing interest toward amorphous materials is the need to improve the bioavailability of compounds with poor aqueous solubility. The amorphous state is also of great importance for excipients used in various dosage forms. These developments are discussed in this book as well as the tracking of the ageing process of amorphous materials that is possible using an array of techniques (calorimetry, scanning electron microscopy, X-ray diffraction). Finally, Hydrogen is emerging as a strong candidate to replace fossil fuels. Hydrogen storage through metal hydrides is the most compact and safe form of storing this gas. Mg alloys, which are known to have large storage capacities and great improvements in activity are examined when they are obtained when these alloys are synthesised with amorphous structures.
Toon meer Toon minder