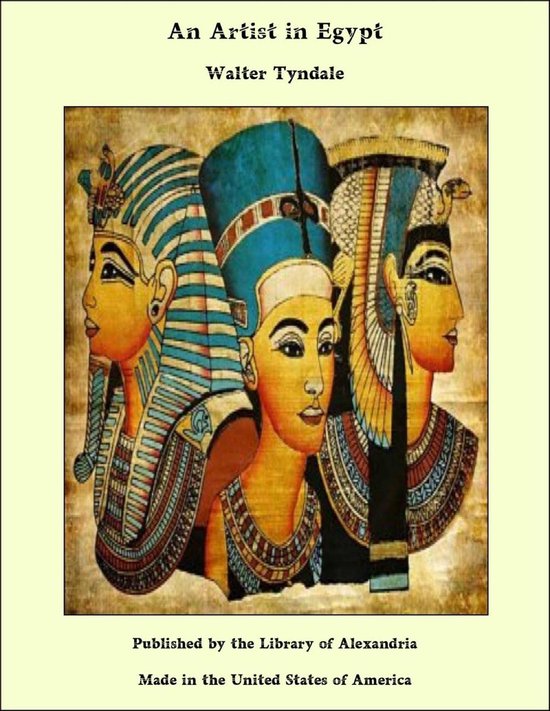 AFTER a lapse of some years, I returned to Cairo to attempt once again to paint its ancient buildings, as well as the picturesque incidents seen in the shadows they cast or bathed in light against their sunlit walls. I made an early start on the first morning after my arrival, partly to look for a subject, and more particularly to see whether the pictorial side of the old quarters of the city would still impress me as it did on my first visit. It was a fateful morning, for had what I saw failed to stir up my former enthusiasm, I was resolved to pack up my traps, and try my hand in Upper Egypt. I hurried along the Mousky as fast as its usual crowd of people would allow, and turned down the Khordagiyeh to see if an old favourite subject of mine had not been ‘improved away.’ Needless to say, it was a brilliant morning, for the occasional grey days of midwinter were still a long way off. Great awnings hung across the street, and on one side the shopmen were lowering blinds or rigging up matting, in anticipation of the sun which would shortly be streaming down on them. Everything still had its summer look, though October was far spent;—and Cairo, let me say, is much more beautiful in hot weather than during the comparatively chill days of winter. The particular houses I had gone in search of were happily untouched; but had they been restored out of all shape or allowed to fall down for want of repair, I should hardly have had room for a depressing thought. From the crowd of country folk and the heavily laden camels and donkeys, it was evident that a market was being held in the open space in front of the Beit-el-Kadi. Locomotion was difficult till the Nahasseen or coppersmith street was reached, for here the road widens out at the Muristân. This handsome building, together with the mosques of Kalaûn, en-Nasir, and of Barkûk, formed a magnificent group, massed as they then were in a luminous shade. It was a meeting of old friends, and old friends looking their best. The dark awnings stretched across the road gave this pile of masonry a light and ethereal look, though they were dark in contrast to the azure above, save where the sun tipped the domes and a face of the minarets. The crowd allowed but little time for contemplation; I had to move with it, and reaching the short street which leads to the Beit-el-Kadi, a converging stream of people carried us along till we arrived at the market square. I picked my way through the heaps of fruit and vegetables which littered the ground, passed behind a group of camels, and worked my way to the steps of the court-house, which gives its name to the market. From this point of vantage I was enabled to make some rough studies of the animated scene before me. The sun had now risen high enough to flood the larger part of the square in light. Bits of matting, sailcloth, or anything which can cast a shadow, were rigged up to protect the more perishable goods, and the early comers had taken advantage of the shade of the acacia trees at the further end of the market. The general impression is one of light, colour, noise and movement. The detail is full of human as well as pictorial interest. Various combinations of colour—some beautiful, some inharmonious—leave ample scope to the painter to arrange his scheme. A pile of oranges and lemons, with the black and deep purple dress of the fellaha saleswoman, make a striking note in the foreground; the stacks of pitchers brought down from Balliana, in Upper Egypt, give a variety in buffs and greys, and the blue garments of the buyers are sufficiently faded not to contrast too violently. It is also a great study of types and characters. The noisy Cairene is chaffering with the quieter Shami from far Damascus for some pomegranates which are heaped before him; the Maghraby hawks a bundle of yellow slippers; Jew and Greek are trying to outdo each other in a deal over a spavined horse.