An Irish Precursor of Dante: A Study on the Vision of Heaven and Hell Ascribed to the Eighth-century Irish Saint Adamnán with Translation of the Irish Text EBOOK Ebooks kunnen worden gelezen op uw computer en op daarvoor geschikte e-readers. 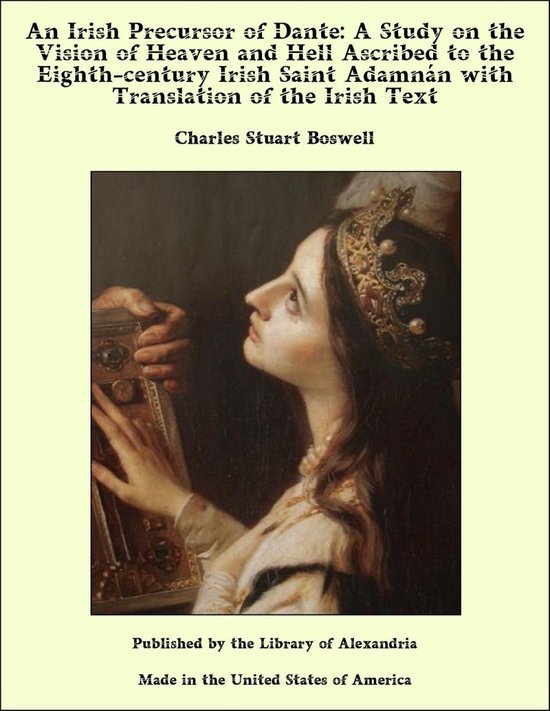 Few, if any, of the great masterpieces of literature, even of those which bear the most unmistakable imprint of an original mind, are ‘original’ in the vulgar sense of being invented ‘all out of the head’ of the author. Most frequently they are the development and the sublimation of forms and subjects already current; for, as Dumas père truly said, it is mankind, and not the individual man, that invents. The wagon of Thespis preceded the stage of Æschylus, while Thespis himself had predecessors who did not even adopt the wagon. The great dramatic schools of all periods took the greater and better part of their themes from the myth, history, or fiction current in their day. So it has been with most other kinds of literature, and to this rule the Commedia of Dante, though one of the most truly original creations of the human mind, forms no exception. The main subject of the poem, the visit of a living man, in person or in vision, to the world of the dead, and his report of what he had seen and heard there, belongs to a class of world-myths than which few are more widely distributed in place or time, and none have been more fortunate in the place won for them by the masters of literature. After occupying an important place in several of the antique religions it afforded subjects to the genius of Homer, Plato, and Virgil; it was then adopted into the early Christian Church, and afterwards constituted one of the favourite subjects in the popular literature of the Middle Ages, until, finally, Dante exhausted the great potentialities of the theme, and precluded all further developments. The Commedia is like a mighty river formed by the confluence of several great tributaries, each of which is fed by innumerable springs and streamlets, which have their rise in regions remote and most diverse from each other, and are all tinged by the soil of the lands through which they flow. It is with one of these tributary streams that the following pages deal, and that not the least important among them, for to it the Vision of the Otherworld, as current in the later Middle Ages, owed much both of its popularity and its contents, not, indeed, by way of direct derivation or suggestion—a view which several circumstances forbid us to entertain—but as the result of an influence which, in an earlier stage of culture, had determined the direction which the Vision legend actually followed in its later developments. The subject would appear to have possessed a special fascination for the Irish writers at the time when Ireland was the chief intellectual centre of Western Europe, and the constant flux and reflux of Irish teachers and foreign students necessarily tended to spread abroad so much, at any rate, of the compositions of the Irish schools as was in harmony with the tastes and beliefs of Christendom at large. By far the most important of the Apocalyptic writings which proceeded from the Irish schools is the Vision which bears the name of St. Adamnán, of which a translation is given in the present volume. It is interesting to compare it with the later and greater work, and to mark the numerous points of resemblance which may be discerned in works so widely different. This and the like productions of a ruder, but not ignorant nor uncultured, age, deserve no less attention than that which we bestow upon the works of the primitive schools of art and letters, before Giotto and his compeers had effected the release of painting from the bonds of formalism, and had opened out the ways of Nature and imagination, and before the immediate predecessors of Dante had rendered possible his dolce stil nuovo.