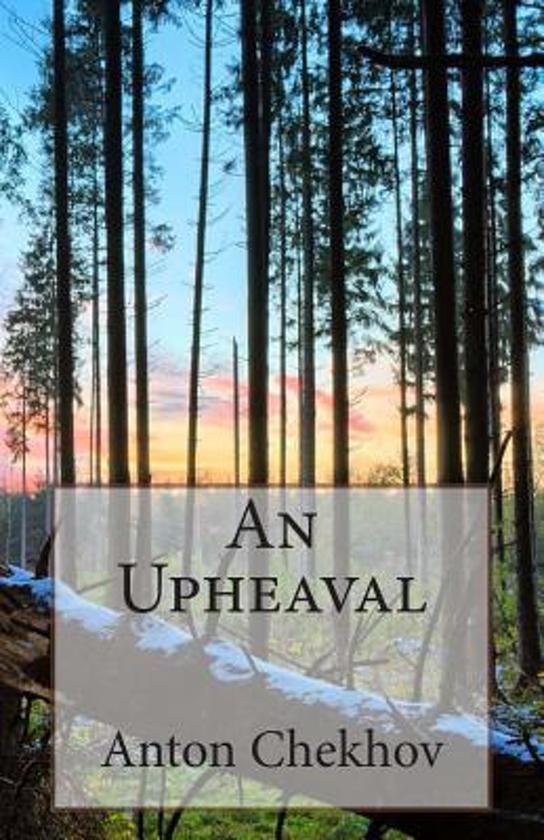 An Upheaval is a short story by Anton Pavlovich Chekhov.Anton Pavlovich Chekhov, (29 January 1860  15 July 1904) was a Russian physician, dramaturge and author who is considered to be among the greatest writers of short stories in history. His career as a dramatist produced four classics and his best short stories are held in high esteem by writers and critics. Chekhov practised as a medical doctor throughout most of his literary career: ''Medicine is my lawful wife'', he once said, ''and literature is my mistress.''Chekhov renounced the theatre after the disastrous reception of The Seagull in 1896, but the play was revived to acclaim in 1898 by Constantin Stanislavski's Moscow Art Theatre, which subsequently also produced Chekhov's Uncle Vanya and premiered his last two plays, Three Sisters and The Cherry Orchard. These four works present a challenge to the acting ensemble as well as to audiences, because in place of conventional action Chekhov offers a ''theatre of mood'' and a ''submerged life in the text.''Chekhov had at first written stories only for financial gain, but as his artistic ambition grew, he made formal innovations which have influenced the evolution of the modern short story. His originality consists in an early use of the stream-of-consciousness technique, later adopted by James Joyce and other modernists, combined with a disavowal of the moral finality of traditional story structure. He made no apologies for the difficulties this posed to readers, insisting that the role of an artist was to ask questions, not to answer them. Always modest, Chekhov could hardly have imagined the extent of his posthumous reputation. The ovations for the play, The Cherry Orchard, in the year of his death showed him how high he had risen in the affection of the Russian publicby then he was second in literary celebrity only to Tolstoy, who outlived him by six yearsbut after his death, Chekhov's fame soon spread further afield. Constance Garnett's translations won him an English-language readership and the admiration of writers such as James Joyce, Virginia Woolf, and Katherine Mansfield. The issues surrounding the close similarities between Mansfield's 1910 story ''The Child Who Was Tired'' and Chekhov's ''Sleepy'' are summarised in William H. New's Reading Mansfield and Metaphors of Reform The Russian critic D.S. Mirsky, who lived in England, explained Chekhov's popularity in that country by his ''unusually complete rejection of what we may call the heroic values.'' In Russia itself, Chekhov's drama fell out of fashion after the revolution but was later adapted to the Soviet agenda, with the character Lopakhin, for example, reinvented as a hero of the new order, taking an axe to the cherry orchard.One of the first non-Russians to praise Chekhov's plays was George Bernard Shaw, who subtitled his Heartbreak House ''A Fantasia in the Russian Manner on English Themes'' and noted similarities between the predicament of the British landed class and that of their Russian counterparts as depicted by Chekhov: ''the same nice people, the same utter futility.''
Toon meer Toon minder