Anglicisms in the Russian Language Based on -Ing Borrowings 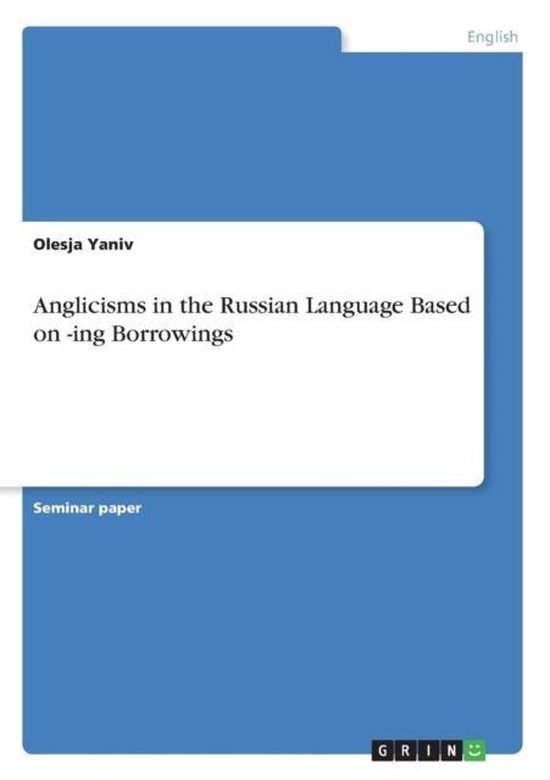 Seminar paper from the year 2015 in the subject English Language and Literature Studies - Linguistics, grade: 1,7, Justus-Liebig-University Giessen (Anglistik), course: Morphology, language: English, abstract: In every era of the history there were languages, that were spoken not only in its own culture, but also in other cultures for the reason of cultural, political, religious, scientific or economical executive positions of the concerning empire or state. A lot of european languages have been influenced by Latin and Greek because of the christianisation and the expansion of the roman empire to Gallia, Germania and the British isles. In the 18th century Frech became Lingua Franca, spoken by the royality. After the second worldwar English became a medium for worldwide accommodation by economical and political increasing of the United States. Throughout history many loanwords from the English have been adopted into Russian and many other languages, especially at the end of the 20th century and at the beginning of he 21st century. Since the end of the east-west conflict and the international position of the USA a rising use of anglicisms in the Russian language have been noticed.Every language is changing and is par of a lasting developemental process. Every part of developement and a linguistic era leave marks by implying new words while other words dissappear and become part of the past, also in Russian and English. New scientific and technological developements, the rapid growth of mass media and the public life are reasons for emergence of new words and meanings in English. They partly influence other languages for the reason of intergovernmental contacts in various areas and the global relevance of the English language in such a way, that it can be called an anglicism-explosion. The term paper at hand is targed to give an overview of the linguistic developement of Russian language influenced by the English language and the reason for English as an influential
Toon meer Toon minder