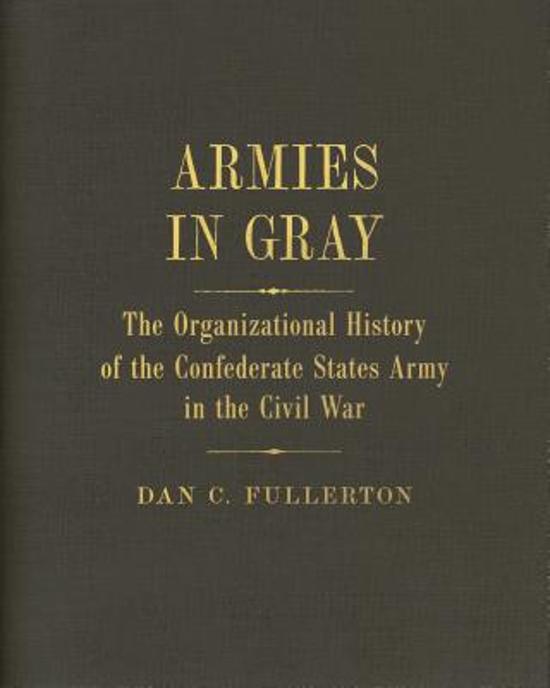 In the tradition of Ezra J. Warners magisterial Generals in Gray, military historian Dan C. Fullerton supplies an indispensable reference work on Confederate forces over the entire course of the Civil War. Armies in Gray details the development and organization of the southern armies, their evolution over the course of the conflict, their command structure, and their geographic assignment and placement. Developed through a decade-long analysis of an array of primary-source materials, Armies in Gray provides an entirely new understanding of the operations and strategies of the Civil War by examining how the Confederate War Department and field commanders used their fighting forces.


Unlike typical battle histories, which analyze the events of a single action at a single point in time or offer only a brief overview of the fighting forces overall organization, Armies in Gray focuses on the structure of the Confederate ranks as a whole. Fullertons meticulous examination of the Confederate Army allows readers to assess how well military leaders utilized their troops to achieve their tactical goals as they waged battles against the armies of the North. Divided into three-month quarters over the duration of the war, this reference guide details the origins of all Confederate brigades, divisions, corps, districts, and departments. It also reports on ordered changes to these units, providing details on the evolution of Confederate forces and on how commanders deployed them through the entirety of the war. By looking at the organization of the Confederate armies in each quarter, readers can gain a clearer picture of the forces available to southern military leaders as they developed their plans at every stage of the Civil War.


Armies in Gray fills a void in Civil War studies, providing an accurate picture of the development of the Confederate armies, how commanders wielded them, and ultimately, how they were defeated by the Union Army as the nations bloodiest conflict drew to a close.
Toon meer Toon minder