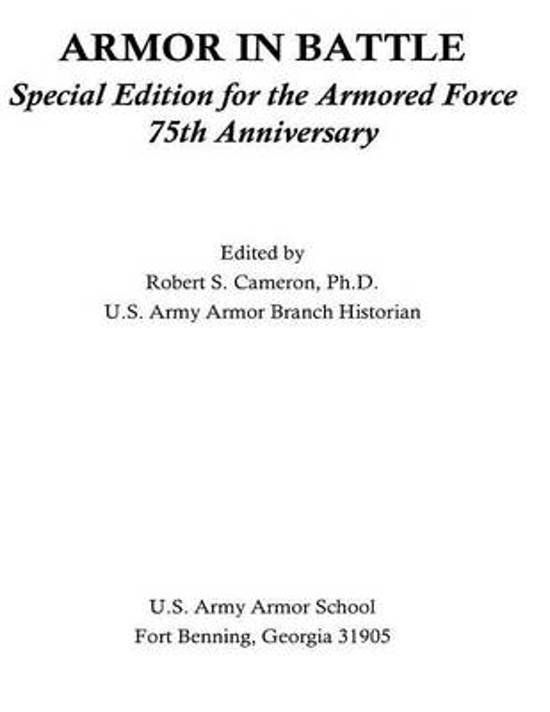 The Armor Branch provides a unique set of capabilities for today's expeditionary Army. The combination of mobility, firepower, survivability, tempo, and shock at both the platform and unit level makes Armor a critical component of the modern combined arms team. These qualities provide armored organizations the versatility necessary for success amid the uncertainties and complexities of future operational environments. Similarly, they ensure the means to outmaneuver and defeat an array of potential threats, including re-emerging ones. These qualities and their continuous evolution across the range of military operations constitute an underlying theme in the following pages.Armor in Battle: Special Edition for the Armored Force 75th Anniversary captures the essence of Armor through accounts of small unit engagements from the interwar years through the Global War on Terrorism. From the maneuver concepts pioneered by the 7th Cavalry Brigade (Mechanized) in the 1930s through operations in Iraq and Afghanistan, these pages showcase Armor's ability to operate in the high intensity environments of World War II and the first Gulf War, its suitability for counterinsurgency operations in Vietnam and Iraq, and its value in stability and support operations in Occupied Germany and the Balkans.This publication uses historical accounts as a professional development tool. Study of the actions described in the following pages provides insight into the maneuver and command of armored organizations directly applicable to current and future operational environments. Executing a fast paced engagement against an aggressive enemy, leading a movement to contact in low visibility conditions, overcoming supply concerns, and battling a determined foe in an urban environment represent tactical concerns to which tankers from World War II to the present can relate. Similarly, managing hostile crowd behavior, preventingcomplacency during routine checkpoint operations, interacting with a civilian population, and responding to sudden insurgent attacks are experiences common to Armor soldiers who served in Occupied Germany, Vietnam, or the Balkans. Leaders can expect to confront many of these challenges on their next operational deployment.The special sections devoted to the creation of the Armored Force serve as a reminder of Armor Branch's roots and identity. From these beginnings emerged a branch noted for its aggressiveness, rapid action, and versatility-qualities which underscored Armor's role as the combat arm of decision.D. SCOTT MCKEAN BRIGADIER GENERAL, USA CHIEF OF ARMOR
Toon meer Toon minder