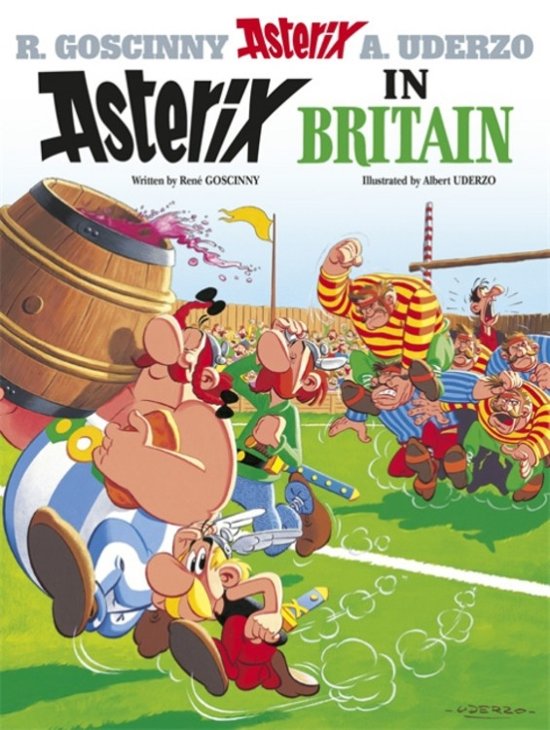 René Goscinny was born in Paris in 1926. In 1942, he graduated as a Fine Arts student, only a month before his father died. René found a job at a tyre factory, and when he was laid off he became a junior illustrator at an advertising agency.

In 1945, his oncle invited him and his mother to visit him in the Unites States, and there Goscinny found a job as translator. He was drafted into army service, which he served in France. When he returned, he settled in Brooklyn and started pursuing an artistic career. In 1948, he became assistant in a small studio where he met young American artists Harvey Kurtzman, Willy Elder, John Severin and Jack Davis, who would be the founders of MAD magazine in 1952. He also met Joseph Gillain, better known as Jijé, and Maurice de Bévère, who signed his work Morris. He would work with Morris on the comic series 'Lucky Luke' from 1955 until his death in 1977.

He also met Georges Troisfontaines, chief of the World Press agency, a firm that delivered comics to Spirou magazine. Goscinny wrote some 'Belles Histoires de l'Oncle Paul', as well as an episode of 'Jerry Spring'. Goscinny became head of the Paris office of World Press. Here, he met Albert Uderzo, with whom he started a longtime cooperation. They started out with some work for Bonnes Soirées, a female magazine for which Goscinny also produced 'Sylvie' with Martial. Goscinny began a collaboration with La Libre Junior in 1952, and stayed there until 1957. He created the humorous 'Jehan Sepoulet' and 'Luc Junior' with Uderzo, as well as 'Fanfan et Polo' with Dino Attanasio and 'Alain et Christine' with Martial.

In 1955, Goscinny, accompanied by Charlier, Albert Uderzo and Jean Hébrard, founded the syndicate Edipress/Edifrance. The syndicate launched publications like Clairon for the factory union and Pistolin for a chocolate company. Goscinny and Uderzo cooperated on the series 'Bill Blanchart' in Jeannot, 'Pistolet' in Pistolin and 'Benjamin et Benjamine' in the magazine of the same name. Goscinny drew ' Le Capitaine Bibobu' by himself in Risque-Tout in 1955/56. Under the pseudonym Agostini, Goscinny created 'Le Petit Nicolas' with Jean-Jacques Sempé in Le Moustique and later Sud-Ouest and Pilote.

In 1959, the Édifrance/Édipresse syndicate launched the magazine Pilote. Goscinny became one of the most productive writers for the magazine. In the magazine's first issue, he launched his most famous creation, 'Astérix', with Uderzo. This series was an instant hit and is now known worldwide. Goscinny also restarted the series 'Le Petit Nicolas' and 'Jehan Pistolet', now called 'Jehan Soupolet'. Goscinny also began 'Jacquot le Mousse' and 'Tromblon et Bottaclou' with Godard.

Besides comics, Goscinny has also written a lot for television. But it was through the great success of 'Astérix' and 'Lucky Luke' that Goscinny became one of the most important and famous scenarists of the European comic.

One little ancient British village still holds out against the Roman invaders. Asterix and Obelix are invited to help. They must face fog, rain, warm beer and boiled boar with mint sauce, but they soon have Governor Encyclopaedicus Britannicus's Romans declining and falling. Until a wild race for a barrel of magic potion lands them in the drink. It's not quite cricket - how about a nice cup of hot water, though? Or even the first ever tea-party?

It may be more than 50 years old, but it's still very funny * The Week Junior * A great comic series proving that children's literature isn't limited to prose. * Time Out *