Attraction and Repulsion in the Universe Explanation of Mass, Dark Energy, Dark Matter, and Their Places in Creation 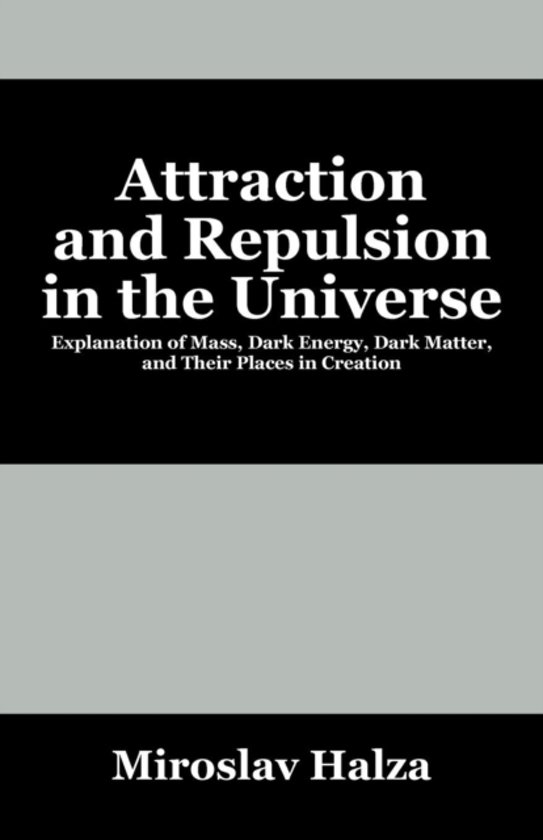 The book Attraction and Repulsion in the Universe explains the terms "Mass," "Dark Energy" and "Dark matter." Miroslav Halza hypothesizes the existence of a trinity of subatomic "Builder particles" that manage the growth and expansion of the post-Creation universe via three elemental long-range forces. Gravitons mediate the relatively weak gravitational force, which draws objects together; photons mediate its opposite, the photational force that pushes objects apart; and neutrinos (along with their parent particles, magnetons) mediate the powerful inductive attractive force. Drawing on recent discoveries in the field of astronomy, astrophysics, and particle physics, Halza carefully combines classic mechanics with its quantum counterpart to draw conclusions about underpinnings of our Universe that are both Biblically acceptable and scientifically plausible. Extrapolating from undisputed physical law and counterintuitive subatomic interactions alike, he goes on to explain why the inductive force obviates the need for the hypothetic "dark matter" that some cosmologists add to their theories of the universe in order to balance their equations--based on the misconception that gravity acts as the only long-range attractive force in our universe. The roles of "Builder particles" at stars are: photons push unused hydrogen fuel away from a nuclear furnace so that newly created products can appear. Thus, photons are responsible for the expansion of the universe. Neutrinos take away the newly created matter (the inductive matter) from "Cashes" in the cores of stars, so this useful matter will not be destroyed or lost. Gravitons pull objects together (bind them); they drag fuel into the fusion zone of a star and, at the end of the star's life, squeeze the stellar ash into increasingly small volumes. One of the ramifications of Halza's theory is that the observable matter in the universe may, in fact, be all there is--and that it exerts an attractive force six times stronger than previous theories allow for, given the inductive force's presence. Among other things, this suggest that our Sun contains only one-sixth of its previously calculated mass--which has starting implications regarding the Sun's age and expected lifetime, and the fate of all life on Earth.
Toon meer Toon minder