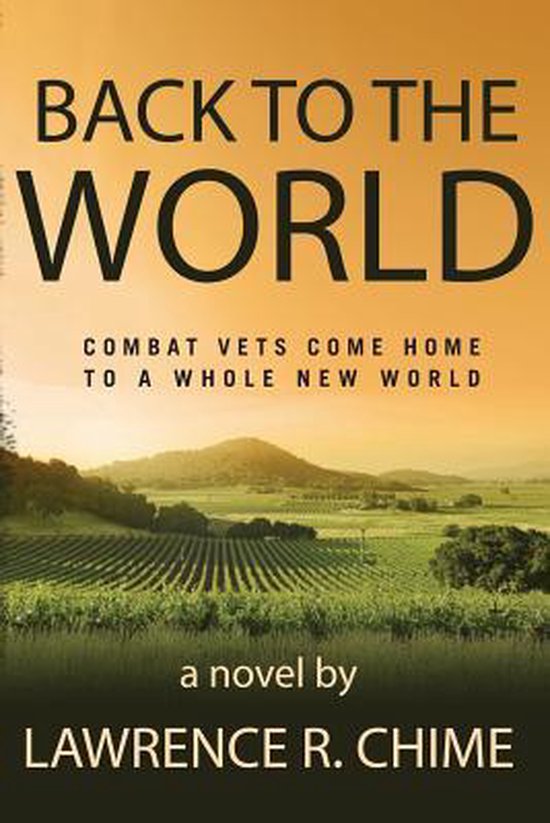 After several harrowing combat tours in the dense jungles of Vietnam, a young Navy Seal, John McConnell, must come to grips with his own demons as he returns stateside. He goes up to the vibrant and carefree city of San Francisco and through a series of odd coincidences, lucky breaks and what could only be called a ''soul'' attraction, meets a University of SF grad student and women's volleyball coach, Becky Saunders. Their tumultuous courtship takes them to the blue waters of SF Bay, the rolling vineyards of the Napa Valley, and the rugged Northern California coast. Throughout the story John & Becky touch the lives of many people; some are veterans still trying to find their way; others bored with a routine and superficial existence, but all trying to find meaning in their lives. Back to the World is author Larry Chime's foray into the heart of darkness of Vietnam (or any war really) to chart the course of one soldier who holds out hope for finding, despite not fully understanding his violent past, his place in the world. A gritty, authentic romance from the heady days of the 1960's, it's a great read for spec ops, abalone divers, wine enthusiasts or simply those who believe in the redemptive power of romantic love. It's a novel with a rich and sometimes rocky terrain, certain to captivate anyone who knows the perils and blessings of the human heart.


''Larry Chime's Back to the World is an interesting and detailed description of the Vietnam war and the men who were there in the 1960's. Although a good novel, it has a strong tang of realism, especially for those of us who want images and emotions served in mugs not demitasse.'' Kenneth Levin (former Navy Lt.) & author of Crazy Razor; a novel of the Vietnam war.


''Larry builds his story using a cast of characters from SEAL Team One during the Vietnam war. Even though his is a work of fiction, I can attest to the accuracy of Seal OPERATIONS IN THE Vietnam part of the book as I did three tours in Vietnam. Larry's scenario is built upon the life of one of these Seals when he returns home from the war. I found the book to be a page turner & a very good read.'' Master Chief Tom Keith USN(Ret.) & author of Seal Warrior; Death in the Dark.


'My own husband was a Vietnam Navy Seal. Reading this book and following John and Becky's journey was so reminiscent and exciting. Action and romance! What a wonderful and well told story.'' Mrs. Nancy Wilson.


''Hoo-Yah! Back to the World has everything I like in a book; Seal Team ops in Vietnam, humor, action and romance about those who served with honor.'' W.A.(Bill) Garnett, MCPO UDT 22 & SEAL Team Two. USN-Ret.


''An exciting novel with all the makings of a great movie. Chime weaves together the emotions, actions and relationships of a Vietnam era Navy Seal and his transition from a lethal jungle fighter to an equally rousing & satisfying civilian life. CWO4 W.C. Woodward USN (Ret.) Navy Explosive Ordinance Disposal Officer. Deep sea & salvage diver.


Mr. Chime was a Naval Officer who served in Vietnam in 1967.