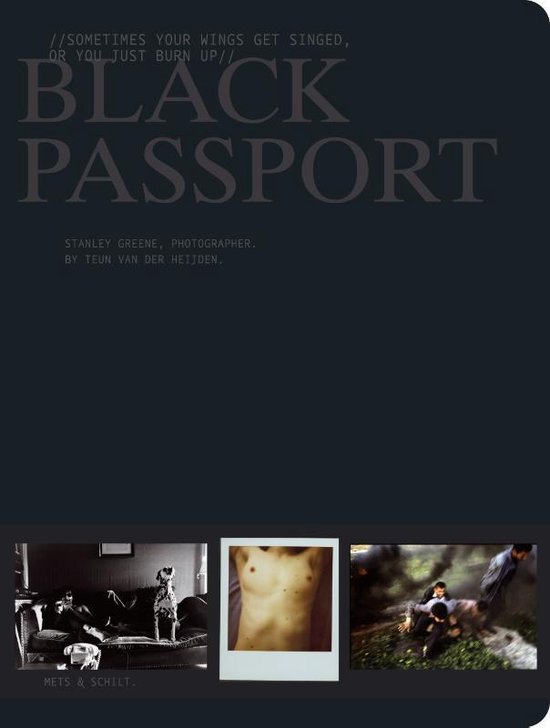 Every day the newspapers and magazines are full of photographs depicting war and oppression. But the life of a war photographer is also a fascinating story. For what motivates someone to be confronted with death and misery? To do your work while risking your own life, sometimes literally amidst flying bullets? Does a war photographer see it as a task to lend a voice to the oppressed of the world? Is it political engagement? Or is being a war photographer an escape from the day-to-day reality, a craving for adventure?
Black Passport is the biography of the life of war photographer Stanley Greene. It shows Greenes war images alternated with private images. The viewer makes acquaintance with Stanleys friends, his wife (later ex-wife), his female friends and his colleagues. Just as Greene himself, the viewer experiences being tossed to and from between the safe western life and the horrors of wars elsewhere. What effect does this work the confrontation with horrors have on his character? How does it influence his relationships, his loved ones and friends? The basis of Black Passport is, in addition to the photography, a long monologue by Greene.
Teun van der Heijden has put this monologue together from rough material that was the result of eight extended interviews, and is presented as a film script, in 26 short scenes. The scenes do not form a sequential story, but are a kaleidoscope of Greenes key experiences. In the first scene, we meet him for example as an au pair in Paris, in scene 20 he bursts into tears following the lynching of two American security officers in the Iraqi Fallujah. The bodies were then set on fire. With the exception of one flashback, Stanleys story is told chronologically in the book. The 26 scenes are given shape by 26 photograpic portfolios, each beginning with a short monologue. These monologues are never longer than one page, so that they do not disturb the rhythm of the book. The typography is detached and serves to support the spoken character of the monologue. The editing is filmic, the layout rough as in a sketch book. All photos are displayed on black pages.
Toon meer Toon minder