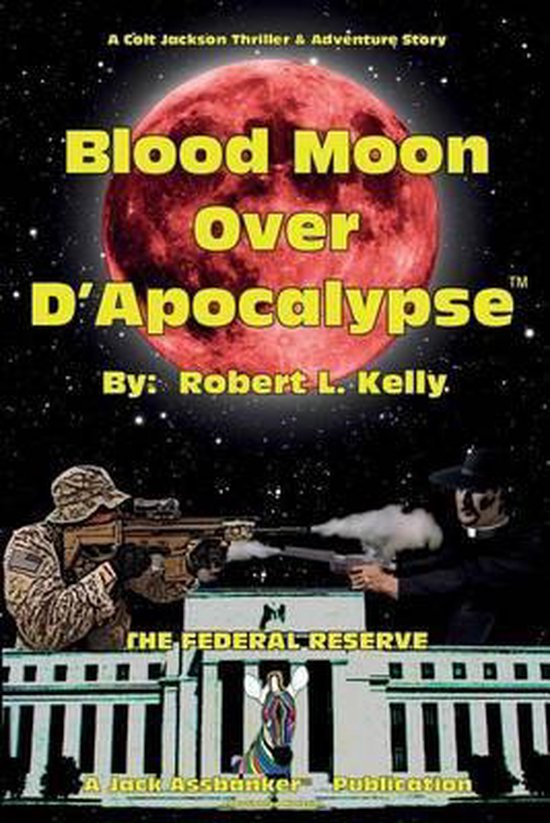 Blood Moon Over D'Apocalypse™ takes the reader on an action-packed journey and introduces Commander Colt Jackson, a true American hero and Christian warrior, to the world at large.

Because of a devious and brilliant scheme against the United States, for the first time in history, the President must activate "Seal Team America".

This harrowing and gripping tale brings readers to the edge of their seats.

They are taken inside the famous shark tank on Tokyo Bay and witness gruesome murder in Hong Kong.

They capture the life of the super-elite at the Palace Hotel in Gstaad, while suffering through the turmoil of a riveting, minute-by-minute, heart-thumping chase through the streets of London.

There, a brave, gorgeous and helpless woman is being mercilessly pursued in a "hold-your-breath," page burner!

Just when readers think they are given a break while enjoying a relaxing meal in Georgetown, they are catapulted onto the battlefields of Afghanistan, where a vivid story comes to life eerily reminiscent of current events. Many will visualize the agony and heroism of war, as it unfolds before their very eyes---with a hail of bullets exploding all around them!

All of these events culminate in a great showdown between principalities and powers in the center of the world's political and financial universes --- Washington D.C. and New York City.

Colt Jackson and his old-time friend, Admiral Steven Whistler, must convince a skeptical President and key members of government to implement an immediate plan of action on American soil.

They must takeover the Federal Reserve System of the United States and stop the elite in their tracks! The elite, being aided by none other than Lucifer himself, who is disguised as one of the world's most popular politicians, are plotting the greatest collapse of financial markets in human history. Their objective is to bring every government on earth to its knees.

Their fiendishly diabolical plan is to crush and collapse the world's debt and derivatives markets, on the night of the fourth Tetrad---the Blood Moon over D'Apocalypse™.

Who dies and who doesn't? Is treason committed by the Federal Reserve and the big banks? Will Colt Jackson and his Seals make it through a highly complex gauntlet of murder, mayhem, hysteria and treachery? Will danger at every turn take the lives of innocent souls?

Only the worlds' elite can attest if this tale is true, but one thing is certain: The fate of Colt Jackson, two positively stunning and beautiful women, Seal Team America, the President of the United States and the entire financial future of the U.S. and Western Europe, hangs in the balance! Readers will be left scratching their heads, wondering if this is what the future holds for the world's financial markets.


Christian writer, Robert L. Kelly, is also the author of The Federal Reserve Trilogy, a non-fiction, three-volume investigative reporting work based upon his theory there has been a $30 Trillion Heist from the United States of America by the big banks and uber elite. The three books, The $30 Trillion Heist---Scene of the Crime?, The $30 Trillion Heist---Follow The Money! and D'Apocalypse Now!---The Doomsday Cycle are must reading for anyone wondering why over 100 million people remain unemployed in America and nearly 50% of populations in Europe can't find work.

The trilogy also answers why the stock and bond markets have undergone a tremendous surge during the last several years---and what you can really expect in the future---an unforgettable debt crash!

Because the elites' minds are among the worlds' most clever and brilliant, Mr. Kelly decided to write a book which fictionalizes their story, but not the message and objectives of the world's most wealthy people and their biggest banks.

They only have one goal. They want to control the world's supply of money and bring every government, and the will of the people, to their knees.

It is the hope and prayer of the author word will continue to spread and we will, with the help of God above, indeed stop the elite in their tracks.