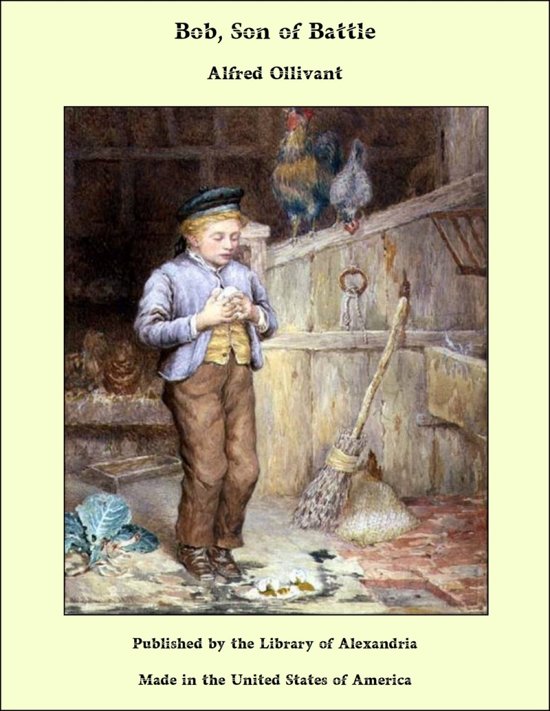 A fair-haired boy came spurring up the slope, his face all aglow with the speed of his running. Straightway the young dog dashed off to meet him with a fiery speed his sober gait belied. The two raced back together into the yard. "Poor lad!" said Sam'l gloomily, regarding the newcomer. "Poor heart!" muttered Tammas. While the Master's face softened visibly. Yet there looked little to pity in this jolly, rocking lad with the tousle of light hair and fresh, rosy countenance. "G'mornin', Mister Moore! Morn'n, Tammas! Morn'n, Sam'l!" he panted as he passed; and ran on through the hay-carpeted yard, round the corner of the stable, and into the house. In the kitchen, a long room with red-tiled floor and latticed windows, a woman, white-aproned and frail-faced, was bustling about her morning business. To her skirts clung a sturdy, bare-legged boy; while at the oak table in the centre of the room a girl with brown eyes and straggling hair was seated before a basin of bread and milk. "So yo've coom at last, David!" the woman cried, as the boy entered; and, bending, greeted him with a tender, motherly salutation, which he returned as affectionately. "I welly thowt yo'd forgot us this mornin'. Noo sit you' doon beside oor Maggie." And soon he, too, was engaged in a task twin to the girl's. The two children munched away in silence, the little bare-legged boy watching them, the while, critically. Irritated by this prolonged stare, David at length turned on him. "Weel, little Andrew," he said, speaking in that paternal fashion in which one small boy loves to address another. "Weel, ma little lad, yo'm coomin' along gradely." He leant back in his chair the better to criticise his subject. But Andrew, like all the Moores, slow of speech, preserved a stolid silence, sucking a chubby thumb, and regarding his patron a thought cynically.