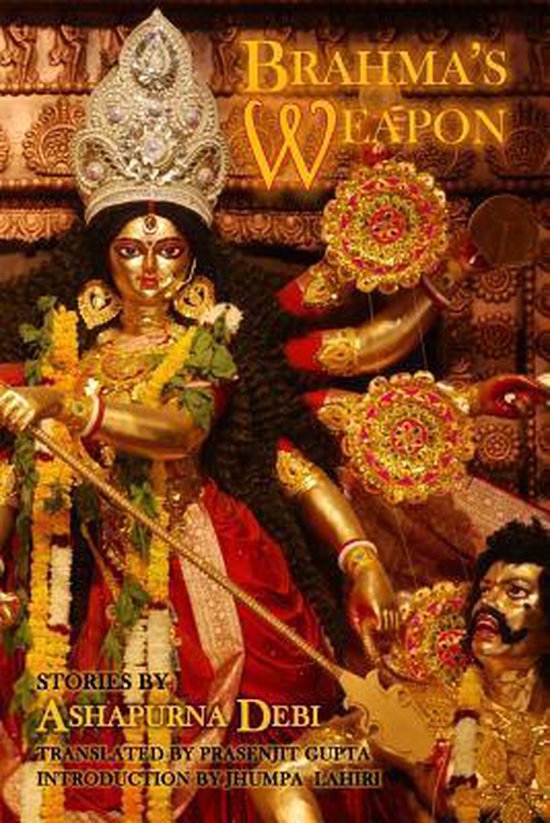 Each of the twenty-one stories in Brahma’s Weapon, carefully selected from the great writer Ashapurna Debi’s extensive oeuvre and brilliantly translated from Bengali, highlights the tensions inherent in a society of close-knit and interdependent families. Focusing on the charged relationships between men and women, Ashapurna illuminates every facet of her heroes’ lives with the light of her intellect, insight, and compassion. And her hero is the Bengali woman, in many ways the everywoman of a changing world, powerless yet powerful, challenged at every turn yet challenging the world of men, fighting back, spirited, indomitable.In “Poddolota’s Dream,” the title character returns triumphant and magnanimous to the scene of a harrowing childhood; it is only at the very end of the story that we find out exactly where her triumph lies. In “Glass Beads Diamonds,” a woman attends a wedding reception at her estranged in-laws’, bearing a gift for the bride; and such is the author’s skill that without being told we know how much that gift has cost the giver. In “Grieving for Oneself,” told from a man’s point of view, a midnight scare shows the protagonist, immobile in his bed, precisely how he fits into his world, this world he’s worked his life to build. It is, as in so many of Ashapurna’s stories, a compelling insight, natural and shocking, terrible and human.Ashapurna is one of those rare writers able to render the voice of an entire culture, to capture its deepest and most abiding traditions indelibly, as also its revealing moments; to bring forth an entire society fully formed and unforgettable. Her created world is Bengal, her creature the Bengali woman within the Bengali family, her creation all the ebb and flow of the Bengali woman’s universe, a world cartwheeling through the stars, dancing among the eternal truths. Her hero is this woman, this middle-class warrior, among her husband and children, among her sisters and neighbors, tight in this web of attachment, utterly indispensable yet utterly alone, reaching for understanding, for sustenance. But she is the provider, not the provided for. She is the sustainer, not the sustained.The characters at the center of these stories pay a price for their knowledge; but it is the price we all pay, as we live our lives, in measures of disappointment, grief, anger—lit by moments of laughter and connection. It is Ashapurna’s triumph, her gift of diamonds to the reader, that she shows us all of this in the compressed spaces of these stories. Reading Ashapurna, we come away understanding, sympathetic, illumined—not only about her characters but also about ourselves.These translations by the critically acclaimed translator Prasenjit Gupta seek to preserve the flavor of the original Bengali as much as possible, to carry across the meanings and metaphors of Ashapurna’s world. The translator has avoided the too-familiar path of hackneyed English idiom in order to create an English that serves the Bengali writer and the Bengali characters, a fresh new dialect that gives the reader an insight into the Bengali language and, since language is shaped by and shaper of tradition, into Bengali culture. Translations from Bengali—and perhaps from any language—have seldom been so effective and powerful; this collection is a glorious example of the translator’s art.Jhumpa Lahiri’s superbly thoughtful introduction to the collection prepares the reader for the grand sweep of the stories, for the universal verities embedded within their narrow domestic walls. This well-researched essay by the accomplished writer and scholar acquaints the reader with the time and place of these tales and presents to the English-speaking world a literary genius, admired for decades in her own country but only now being given her rightful place in the pantheon of world literature.
Toon meer Toon minder