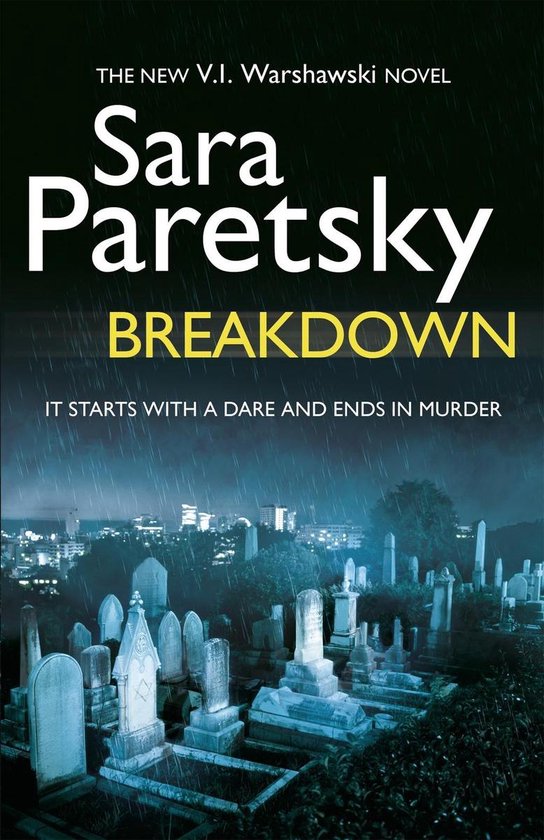 Sara Paretsky is the New York Times bestselling author of the renowned V.I. Warshawski novels. Her many awards include the Cartier Diamond Dagger Lifetime Achievement Award from the British Crime Writers' Association and the 2011 Mystery Writers of America's Grand Master Award. She lives in Chicago.
Alles van Sara Paretsky

Carmilla, Queen of the Night, is a shape-shifting raven whose fictional exploits thrill girls all over the world. When tweens in Chicago's Carmilla Club hold an initiation ritual in an abandoned cemetery, they stumble on an actual corpse, a man stabbed through the heart in a vampire-style slaying. The girls include daughters of some of Chicago's most powerful families: the grandfather of one, Chaim Salanter, is one of the world's wealthiest men; the mother of another, Sophy Durango, is the Illinois Democratic candidate for Senate. For V.I. Warshawski, the questions multiply faster than the answers. Is the killing linked to a hostile media campaign against Sophy Durango? Or to Chaim Salanter's childhood in Nazi-occupied Lithuania? As V.I. struggles for answers, she finds herself fighting enemies who are all too human.

'Both Paretsky and her sharp-tongued justice-seeker, V.I. Warshawski, remain formidable in the masterfully suspenseful fifteenth novel in this superb and adored Chicago-set series ...V.I. reigns as crime fiction's spiky, headstrong warrior woman of conscience, and Paretsky, classy champion of the powerless, has never been more imaginative, rueful, transfixing, and righteous.' Booklist, starred review Warshawski once more takes to the city's mean streets with a passion for justice that belies her age. Canberra Times 'Plotted with all Paretsky's customary generosity, this standout entry harnesses her heroine's righteous anger to some richly deserving targets, all linked together in a truly amazing finale.' Kirkus, starred review 'She is writing with the kind of passion for social justice that inspired Chandler and Hammett' Joan Smith, The Sunday Times 'The thing about Sara Paretsky is, she's tough ... she doesn't flinch from examining old social injustices others might find too shameful (and too painful) to dig up' New York Times V.I. Warshawski was a trailblazing female P.I. when she first appeared in 1982, and she's only grown more compelling. She's honest, tough, loyal, incorruptible, sarcastic, fights for the underdog, gets into trouble and looks hot in a red cocktail dress and heels, even if she'd rather be in flats. What's not to love? Unputdownable. Herald Sun 'This year marks the 30th anniversary of the introduction of V.I. Warshawski, and she has only grown more compelling over the years.' The Daily Telegraph 'After 12 Warshawski novels, Paretsky is still in strong form. She is also utterly up to date. It is, as ever, stirring stuff.' Sunday Age 'Paretsky mastered the conventions of her genre long ago and is able both to use them and to play with them simultaneously. Using these conventions as a framework, Paretsky tells a gripping tale in which the current craze among teens for romantic vampires is an essential part of her plot.' Pick of the Week, Sydney Morning Herald Paretsky's action channels her champion's anger to some thoroughly justified targets woven together in a marvellous finale. V.I. Warshawski is still glib and feisty, though slowing down at 50. Nice to see her ageing, though still very active and passionate about social inequity. Paretsky pulls it off with flair. Manly Daily Paretsky tells a gripping tale. Bendigo Advertiser V.I. Warshawski returns and there's no shortage of intrigue. A typically taut thriller against a backdrop of politics, power and the darkness of the past. Absorbing. The Weekend Gold Coast Bulletin Now in her 50s, the Chicago PI is as brusque, smart and determined as ever. She was a ground-breaker when she first appeared in the 1980s; now she's tried and true but no less exciting ... Paretsky has made no secret of her support for those on the margins of society and her dislike of the right, and here there are too-close-for-comfort portraits of shock jocks and politicians stirring hate while claiming patriotism. I think I'd read about V. I. Warshawski even if there weren't a murder to be solved. The Age Paretsky's action channels her champion's anger to some thoroughly justified targets woven together in a marvellous finale. V.I. Warshawski is still glib and feisty. Central Coast Express Advocate
Toon meer Toon minder