Busy in the Cause EBOOK Tooltip Ebooks kunnen worden gelezen op uw computer en op daarvoor geschikte e-readers. Iowa, the Free-State Struggle in the West, and the Prelude to the Civil War 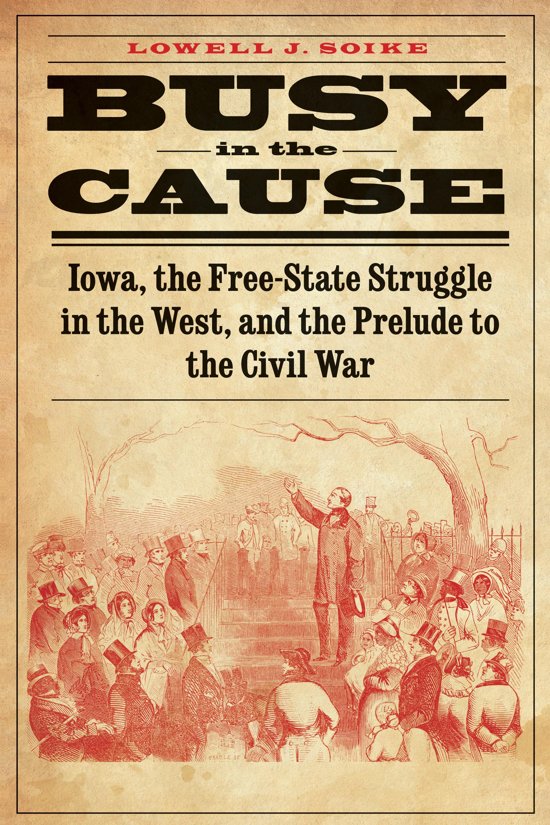 Despite the immense body of literature about the American Civil War and its causes, the nation's western involvement in the approaching conflict often gets short shrift. Slavery was the catalyst for fiery rhetoric on both sides of the Mason-Dixon line and fiery conflicts on the western edges of the nation. Driven by questions regarding the place of slavery in westward expansion and by the increasing influence of evangelical Protestant faiths that viewed the institution as inherently sinful, political debates about slavery took on a radicalized, uncompromising fervor in states and territories west of the Mississippi River.


Busy in the Cause explores the role of the Midwest in shaping national politics concerning slavery in the years leading up to the Civil War. In 1856 Iowa aided parties of abolitionists desperate to reach Kansas Territory to vote against the expansion of slavery, and evangelical Iowans assisted runaway slaves through Underground Railroad routes in Missouri, Kansas, and Nebraska. Lowell J. Soike's detailed and entertaining narrative illuminates Iowa's role in the stirring western events that formed the prelude to the Civil War.

Soike's 36 years as historian for the Iowa State Historical Society is reflected in the extensive research and knowledge shining through on every page. -Vernon Schmid, Roundup Magazine -- Vernon Schmid * Roundup Magazine * Soike's clearly written narrative illuminates the intersection between free soilism in Iowa and turmoil in Bleeding Kansas. . . . [She] has filled a niche in elaborating Iowa's role in the territorial struggle. -Nicole Etcheson, Middle West Review -- Nicole Etcheson * Middle West Review * Busy in the Cause is a unique and important contribution to Iowa history and to the literature of the 1850s Free Soil movement in the unsettled West. -Civil War Books and Authors * Civil War Books and Authors * Busy in the Cause is a lively and engaging narrative. -Brent M. S. Campney, Western Historical Quarterly -- Brent M. S. Campney * Western Historical Quarterly * Busy in the Cause is worthwhile reading for anyone who is interested in the run-up to the Civil War in the West. -Dan Holtz, Nebraska History -- Dan Holtz * Nebraska History * Busy in the Cause is a welcome addition to this literature, and its accessible narrative makes the work handy for undergraduate courses on Civil War and western history. -William Hickox, Kansas History -- William Hickox * Kansas History *
Toon meer Toon minder

NUR code
680
Oorspronkelijke releasedatum
2014-06-01
Subtitel
Iowa, the Free-State Struggle in the West, and the Prelude to the Civil War