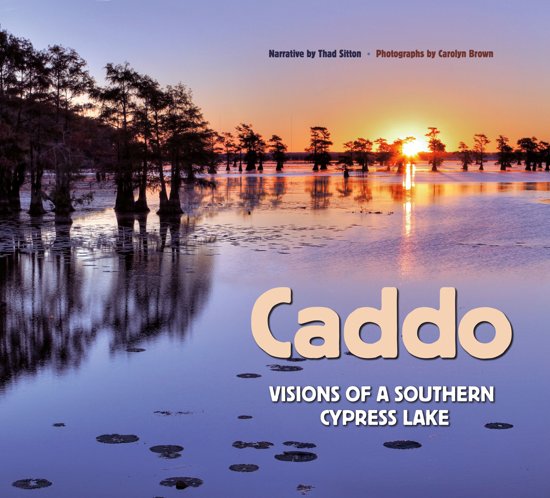 In a stunning tribute to one of Texas' most enigmatic waterways, a veteran East Texas historian and a professional photographer have together created an homage to a lake like no other—half Texas, half Louisiana, a swampy labyrinth of bald cypress and water plants filled with mystery, legend, and a staggering amount of biological complexity.


Classified as a Category 1 Habitat for wildlife by the US Fish and Wildlife Service and encompassing a state wildlife management area as well as a state park, Caddo Lake and adjacent areas have also been designated as a Ramsar Site under the international convention to preserve world-class wetlands and their waterfowl. In both words and pictures, writer Thad Sitton and photographer Carolyn Brown have captured the human, animal, and plant life of Caddo, as well as the history of the lake itself, better likened to an ever-changing network of cypress woodlands, bayou-like channels, water-plant meadows, and hardwood bottoms covered more or less by water.


To learn more about The Meadows Center for Water and the Environment, sponsors of this book's series, please click here.

. . . a recommendation for any collection interested in the region of Texas and Louisiana in general and the natural history of a little-covered sprawling wilderness in particular. --Midwest Book Review --Midwest Book Review The biological life along with the history, mystery and legend is interesting told in Caddo Visions of a Southern Cypress Lake with colorful, yet mysterious and thrilling photographs by Carolyn Brown and a beautiful and informing story by Thad Sitton. --Mexia Daily News--Mexia Daily News (02/02/2015) Mysterious fish, giant alligator snapping turtles, spectral dancers in the early morning fog: historian Thad Sitton has combined with photographer Carolyn Brown to reveal one of the great jewels of Texas, Caddo Lake. Intertwining Sitton's insightful knowledge of all things East Texas with Brown's beautiful photographs we learn that Caddo is the only internationally recognized Ramsar wetland in Texas. Hundreds of birds, fifty plus mammals, frogs and snakes: there is no other place like it, and yet by the end of reviewing this book I was deeply sad. Caddo is nothing like it once was. Dallas is siphoning off the river which the Lake needs to flourish, and Giant Salvinia, an escaped aquarium plant, is threatening to cover this important bastion for wildlife in a green mat of death. Without the cleansing of natural floods, Caddo is choking on invasive plants, sediment, fertilizers and human waste. I am especially thankful though for Sitton's knowledge and Brown's photographs of birds, for one day in the future, if Texas politicians fail to protect the only natural lake in the state, at least we will have this book. --Charles Kruvand, photographer, The Living Waters of Texas-- (10/02/2014) Texas has only one lake: the rest are mere reservoirs. A tangle of swamp forest, blackwater creeks, brush thick islands, and water lily-covered open water, Caddo Lake haunts those who come to know it. Unfortunately, few do know it. The sprawling Caddo wilderness, shared by Texas and Louisiana, is one of the South's best-kept secrets. This is what Caddo: Visions of a Southern Cypress Lake attempts to do: to make the lake well known so that people will use, appreciate, and even protect it. The author creates a powerful weave of painless history, folklore, and ecology, showing the game-rich lake in all its diversity. This book is a tour de force and a pleasure all at once. The color photographs contribute materially to this rich, accurate study. --Pete A. Y. Gunter, Professor Emeritus, University of North Texas-- (09/24/2014) . . . a celebration of a little-known natural area that will interest armchair naturalists and would-be visitors alike. --Midwest Book Review--Midwest Book Review Caddo is a very valuable and informative book. It is a wonderful source of knowledge of the physical lake and region, but it tells of the everyday life of local people. The color pictures will charm and thrill you, while Sitton's stories will enthrall. It is a class book that should be in the library of anyone interested in Texas history and geography and would make a lasting impression on your coffee table. --Mexia Daily News-- (02/27/2015) Thad Sitton has given us, once again, a vivid description of a unique and beautiful part of East Texas. In Caddo: Visions of a Southern Cypress Lake he has shown that wetlands, long considered by many to be insect-ridden, unattractive, and dangerous, are instead an incredibly beautiful place, with a rich and exciting array of plants and wildlife, just waiting to be discovered by the adventuresome. As his canoe slips silently through the dark-watered sloughs, ponds, and meandering channels, Sitton helps us see all the dimensions of the beautiful and mysterious Caddo Lake. To look up through the smooth, towering cypress trees is not unlike being in a magnificent cathedral. To look down and around is to see the amazing array of fish, crayfish, turtles, snakes, birds and mammals that swim, crawl, fly, and walk in this land of moist earth, trees, and water. Colorful people are, and have been, a vital part of the Caddo Lake region. This book is an honest, well-researched storehouse of tales, stories, and history of the people who helped create the myth and reality of a place bypassed by time. --Richard M. Donovan, author of Paddling the Wild Neches-- (09/15/2014)
Toon meer Toon minder