Cantos for the Crestfallen 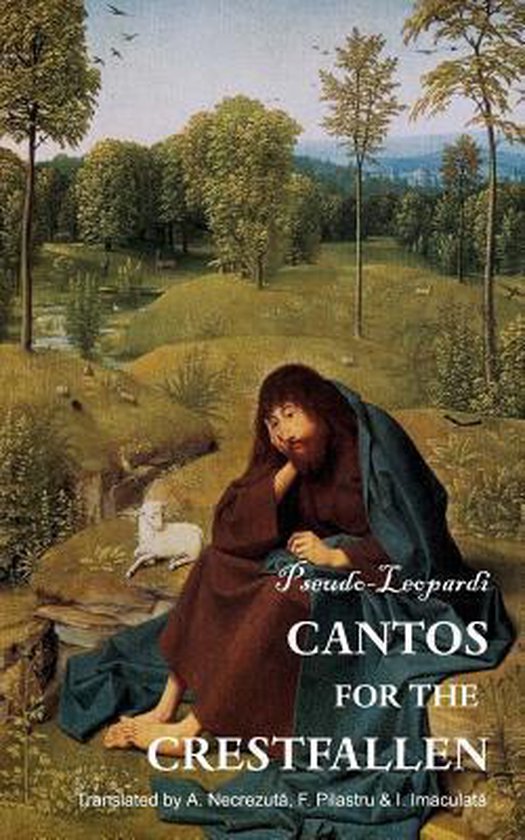 Pseudo-Leopardi's Cantos for the Crestfallen, here translated for the first time from the Romanian original, is a breathless expiration of impossible pessimo-mystical desires for the immanent beyond. In a sequence of thirty one verses channeling the spirits of Cioran, Dante, and the poet's eponym, the Cantos testify to life's senselessness, the necessity of being beheaded, and the love of saints. It is an intoxicated and uncompromising vision: The name of you / Who alter one atom of my sigh is now stricken from life.
"Not since Die Nachtwachen (The Nightwatches), published in 1804 under the pseudonym of Bonaventura, a German Romantic of often-attributed yet arguably still uncertain identity, has there appeared such a book as Cantos for the Crestfallen. Also written by an unknown hand, one drenched in a philosophy and poetics of an apocalyptic tone, the latter title rivals its predecessor in both mystery and melancholy. At the same time that the authors of these works tear the mask from the dark face of the inhuman comedy, they practice a reckless wit that makes the blackness of our lives blacker still. Cantos for the Crestfallen in particular flows with gruesome conceits that empty into an ocean of tears, ultimately drowning its reader far from the sight of land, of home, and of hope." - Thomas Ligotti
"Like his namesake-by-declamatio, the author of Cantos for the Crestfallen has managed to condense all human afflictions into one solitary fusion of despair, a misery with teeth enough to bite the hand off every nescient and conciliatory illusion. And yet to underpin this breathless, almost throttled, ennui (his own sigh even "drowning in air") there is the resolve and the bitterness of a love affair gone wrong, the unrequited affections, the raw feels of the world's interminable spurning; and all of it a lie, a necrophile's symphony tapped out by a heart made ash of, a heart crawling up a corkscrewed spine to die inside a brain." - Gary J. Shipley
"Pseudo-Leopardi's Cantos exhale a spirit of blackened occidental sufism that will make your head spiral." - Pir Iqbal the Impaled
"From the enhaloed entrails of a forgotten notebook comes these Cantos for the Crestfallen. These poems describe nothing and enact everything-litanies of a moldering solar refusal." - Rasu-Yong Tugen, Baroness de Tristeombre
Toon meer Toon minder