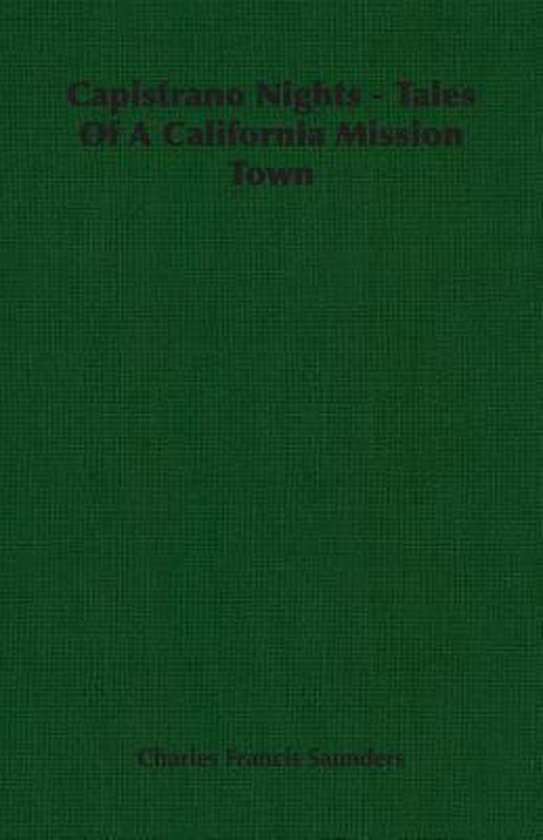 Text extracted from opening pages of book: PREFATORY NOTE San Juan Capistrano, the scene of the follow ing stories, is a village of Orange County, Cali fornia, situated on the main highway midway between Los Angeles and San Diego. It lies in the fork of two small streams, the San Juan and the Trabuco, which issue from neighboring hills and mingling their waters a little below the town, flow together into the Pacific two miles south. The dominating feature of San Juan Capis trano is the old Franciscan Mission of the same name, founded by that devoted pioneer mission ary, Fray Junipero Serra, on All Saints' Day of 1776. At that time the region was populated for miles around only by Indians, whose Christian izing and temporal betterment formed the ob ject of the mission's establishment, and con tinued to be the care of the missionary padres for well on to sixty years, when the missions throughout California were secularized by the Mexican government, and the authority of the missionaries came to an abrupt end. Then fol vi Prefatory lowed years of neglect and vandalism, when the Indians, a prey to disease and exploiting whites, perished like flies j when the mission buildings fell into ruinj and when the people of San Juan Capistrano were often for long periods without guidance of a resident pastor. It is to this interim between the regime of the old padres and the occupation of the mission by Father O'Sullivan in 1910 that these stories relate, the gathering of which has been quite incidental to the Father's duties as a busy parish priest sparks, to use his own words, from the anvil of his daily labors. For the benefit of readers unacquainted with Spanish, it will be as well to add here afew hints for the pronunciation of the words and proper names in that language, occurring in the text: Consonants may be pronounced as in English with the following exceptions: g before e and *, and / always, are like a strongly aspirated h; h is always silent j // in Spanish California is like y, the sound of the / being submerged j n is like our ni in pnion; qu is like k; s has always its hissing sound, and z is like it, the lisp of Castile having no vogue in California. Prefatory tJ pte vii Vowels have the usual Continental pronun ciation, and. all are sounded ( including final e) except the u in the combinations gu and qu; the , however, is given its sound when surmounted by two dots, as gii = goo. As to accentuation, words ending in a vowel or in n or s and family names ending in ez are usually accented on the syllable before the last 5 otherwise, on the final syllable. Exceptions are indicated by an accent mark upon the syllable to be emphasized. Diphthongs are considered as instituting a single syllable* CONTENTS PAGE Prefatory Note ..... v CHAPTER I. Of the Old Mission San Juan Capis trano. The Story of the Boy who would Marry but Changed his Mind; and of the Girl who did not Change hers. Of Dona Polonia's first Mar riage; of how she Led the Children out to Pray for Rain and had to be Rescued from the Floods; and how Dona Manuela Lost an Earring, which San Tiradito found for her . 2 II. Of Buried Treasure. How the Gar dener Cozened Dona Eloisa out of a Mass. The Story of Elogio and how he Paid for a Jug of Aguardiente. The Story of the Oxen and the Treasure. Of Juan Manriquez and how he Sometimes Told the Truth . . 28 III. Of Acu, how he Sheared Sheep yet did not get Rich, andhow he told of Ar row-making and other Aboriginal Matters. The Strange Story of the In dian who Contradicted the Padre; x ( Contents CHAPTER PAGB and another of the Coyote who was not Himself .... 48 IV. The Devotion of El Mes de Mayo. How Dona Dolores Remembered and Prayed. The Story of Matilda, and how she Walked in the Spirit. The Legend of the Unwilling Statue. Of the Dogs' Saint .... 66 V. Jose Doram Sings an Ancient Ballad. Somewhat of William the Fifth, his Verses and his End. The Story of the Man who Sold his Soul to the Devil yet Kept it .... 86 VI. The
Toon meer Toon minder