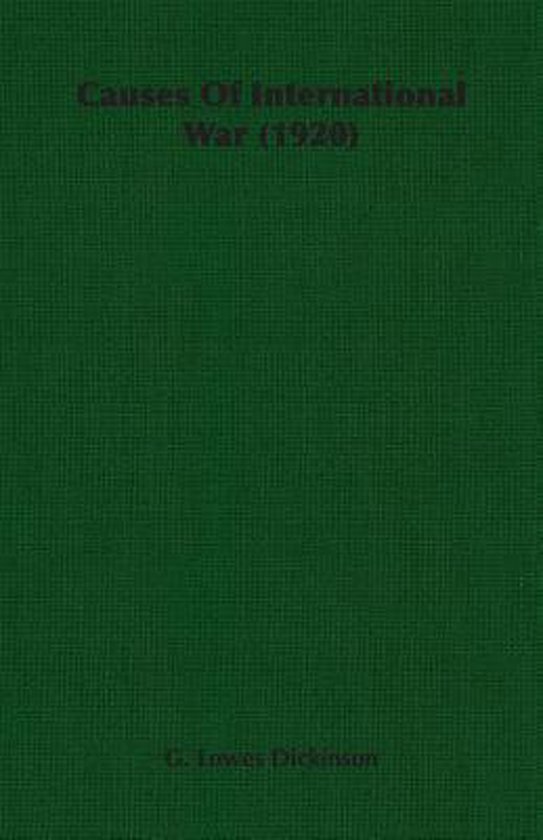 Text extracted from opening pages of book: CAUSES OF INTERNATIONAL WAR By G. LOWES DICKINSON 1920 London: Sew York: THE SWARTHMORE HARCOURT BRACE PRESS LTD. & HOWE 72, Oxford Street, W. i i, West 47* Street CONTENTS CHAPTER PAGE I THE SENSE OF COMMUNITY AS A CON DITION OF WAR 7 II THE ORIGIN AND DEVELOPMENT OF WAR 15 III WAR BETWEEN STATES - - 25 IV THE RESPONSIBILITY FOR WAR OF THE VARIOUS ELEMENTS IN A STATE - 6 1 V REMEDIES - - - 90 A SHORT BIBLIOGRAPHY - - log FOREWORD BY THE EDITOR THE object of this series is twofold; to disseminate knowledge of the facts of international relations, and to inculcate the international rather than the nationalistic way of regarding them* This latter purpose implies no distortion of facts* It is hoped that the books will be found to maintain a high standard of accuracy and fairness* But their avowed object is not merely to record facts* but to present them in a certain light* and with a certain object* That light is Internationalism and that object the peace of the world* If the series is successful in its purpose it will contribute to what Wells has called the international mind/' The object has been to produce the books at a price that shall not be prohibitive to people of small incomes* For the world cannot be saved by governments and governing classes* It can be saved only by the creation, among the peoples of the world, of such a public opinion as cannot be duped by misrepresentation nor misled by, passion* The difficulties of that achievement can hardly be exaggerated* but ought not to daunt* And the editor ventures to hope for support for men of good will in this one attempt, among the many others* to enlighten the intelligence and direct thewill* CHAPTER I THE SENSE OF COMMUNITY AS A CONDITION OF WAR IN discussing war, it is important to distinguish clearly what we mean by it* We do not mean anything so general as conflict or fighting or competition* We mean the deliberate use of organised physical force by groups of men against other groups* Other kinds of conflict might* and no doubt would persist in the absence of war; and to put an end to war would not be the same thing as to put an end to competitive effort That is clear from the history of states* For within an ordered state there is peace, but none the less there is conflict* It is necessary, also* for the purpose of this essay* to distinguish international war from civil* In some periods of history, the distinction is not easy to draw in practice* But it becomes clear as soon as sovereign states have appeared* Inter national war is, then, war between such states; 7 8 UAUSJiS OF INTERNATIONAL WAR while civil war is war between groups included in one of them. More generally, in international war the parties contending do not recognise one another as belonging to a single community; in civil war they do* These two kinds of war have many features in common, but their causes and objects are different* We confine ourselves here to the causes and objects of international war* War, we must first insist, requires accounting for* For, on the face of it, it is not natural but strange* A quarrel, ending with a fight, between two indi viduals, everyone understands* The men are angry, and they want to hurt one arother* But in war, none of the individuals concerned need be, and in fact, commonly, none of them are, at all angry with one another* They have no kind of personalquarrel* Insomuch that, as is well-known* in the late war, during lulls in the fighting, quite friendly relations were sometimes established between the opposing regiments and fraternising *' had to be prohibited and punished by the officers* Millions of men, for four and a half years* were engaged in killing one another, with every circumstance of cruelty, yet broadly speaking, none of them in any CONDITION OF WAR 9 way disliked the others* On the face of it, that is a very curious fact* It is the purpose of this book to enquire how it comes about* It could not co
Toon meer Toon minder