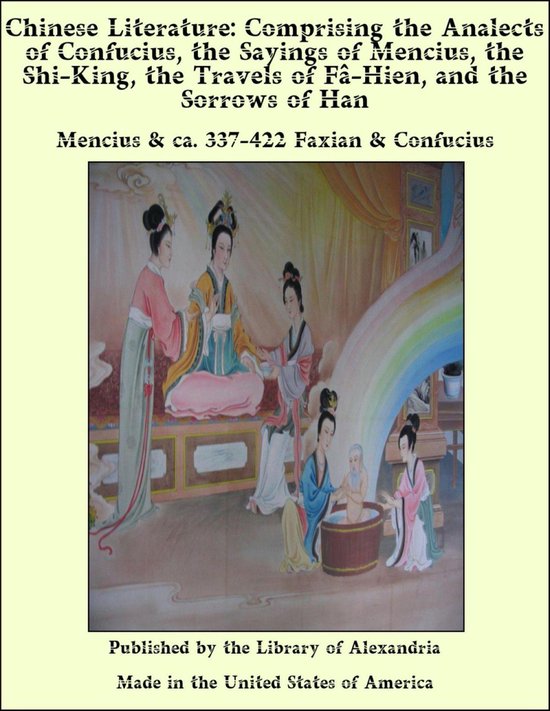 Mencius (372-298 BC) was one of the greatest Chinese philosophers, focusing on political theory and practice. Mencius, like Confucius, believed that rulers were divinely placed in order to guarantee peace and order among the people they rule. Unlike Confucius, Mencius believed that if a ruler failed to bring peace and order about, then the people could be absolved of all loyalty to that ruler and were justified to revolt.
Alles van Mencius
Toon meer Toon minder

The strangest figure that meets us in the annals of Oriental thought is that of Confucius. To the popular mind he is the founder of a religion, and yet he has nothing in common with the great religious teachers of the East. We think of Siddartha, the founder of Buddhism, as the very impersonation of romantic asceticism, enthusiastic self-sacrifice, and faith in the things that are invisible. Zoroaster is the friend of God, talking face to face with the Almighty, and drinking wisdom and knowledge from the lips of Omniscience. Mohammed is represented as snatched up into heaven, where he receives the Divine communication which he is bidden to propagate with fire and sword throughout the world. These great teachers lived in an atmosphere of the supernatural. They spoke with the authority of inspired prophets. They brought the unseen world close to the minds of their disciples. They spoke positively of immortality, of reward or punishment beyond the grave. The present life they despised, the future was to them everything in its promised satisfaction. The teachings of Confucius were of a very different sort. Throughout his whole writings he has not even mentioned the name of God. He declined to discuss the question of immortality. When he was asked about spiritual beings, he remarked, "If we cannot even know men, how can we know spirits?" Yet this was the man the impress of whose teaching has formed the national character of five hundred millions of people. A temple to Confucius stands to this day in every town and village of China. His precepts are committed to memory by every child from the tenderest age, and each year at the royal university at Pekin the Emperor holds a festival in honor of the illustrious teacher. The influence of Confucius springs, first of all, from the narrowness and definiteness of his doctrine. He was no transcendentalist, and never meddled with supramundane things. His teaching was of the earth, earthy; it dealt entirely with the common relations of life, and the Golden Rule he must necessarily have stumbled upon, as the most obvious canon of his system. He strikes us as being the great Stoic of the East, for he believed that virtue was based on knowledge, knowledge of a man's own heart, and knowledge of human-kind. There is a pathetic resemblance between the accounts given of the death of Confucius and the death of Zeno. Both died almost without warning in dreary hopelessness, without the ministrations of either love or religion. This may be a mere coincidence, but the lives and teachings of both men must have led them to look with indifference upon such an end. For Confucius in his teaching treated only of man's life on earth, and seems to have had no ideas with regard to the human lot after death; if he had any ideas he preserved an inscrutable silence about them. As a moralist he prescribed the duties of the king and of the father, and advocated the cultivation by the individual man of that rest or apathy of mind which resembles so much the disposition aimed at by the Greek and Roman Stoic. Even as a moralist, he seems to have sacrificed the ideal to the practical, and his loose notions about marriage, his tolerance of concubinage, the slight emphasis which he lays on the virtue of veracity—of which indeed he does not seem himself to have been particularly studious in his historic writings—place him low down in the rank of moralists. Yet he taught what he felt the people could receive, and the flat mediocrity of his character and his teachings has been stamped forever upon a people who, while they are kindly, gentle, forbearing, and full of family piety, are palpably lacking not only in the exaltation of Mysticism, but in any religious feeling, generally so-called.