Clifford Simak Collection of Sci Fi; Hellhounds of the Cosmos, Project Mastodon, the World That Couldn't Be, the Street That Wasn't There 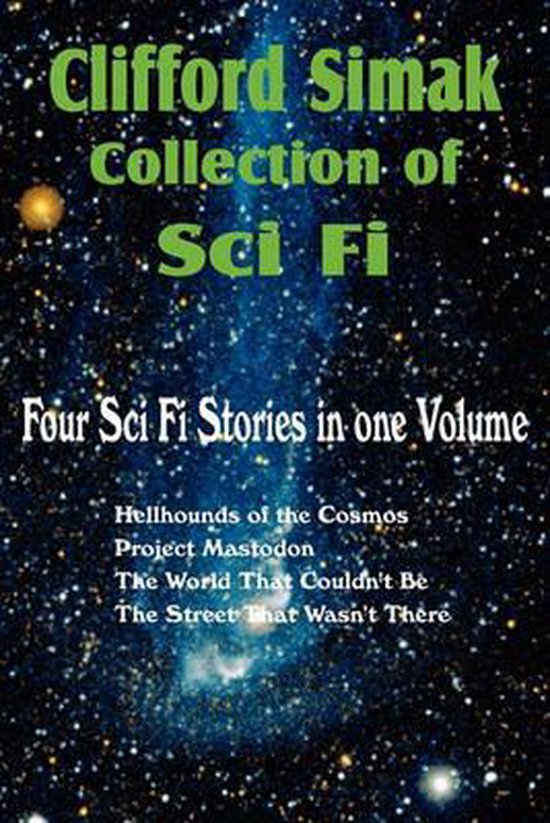 Hellhounds of the Cosmos appeared in the June 1932 issue of Astounding Stories. Weird are the conditions of the interdimensional struggle faced by Dr. White's ninety-nine men. Project Mastodon appeared in the March 1955 issue of Galaxy. He was. Not he alone, but a thousand others, working desperately, knowing that the time was short, working not alone for two men trapped in time, but for the peace they all had dreamed about-that the whole world had yearned for through the ages. For to be of any use, it was imperative that they could zero in the time machines they meant to build as an artilleryman would zero in a battery of guns, that each time machine would take its occupants to the same instant of the past, that their operation would extend over the same period of time, to the exact second. It was a problem of control and calibration-starting with a prototype that was calibrated, as its finest adjustment, for jumps of 50,000 years. Project Mastodon was finally under way. The World That Couldn't Be appeared in the January 1958 issue of Galaxy Science Fiction. Like every farmer on every planet, Duncan had to hunt down anything that damaged his crops-even though he was aware this was- The Street That Wasn't There appeared in the July 1941 issue of Comet. Mr. Jonathon Chambers left his house on Maple Street at exactly seven o'clock in the evening and set out on the daily walk he had taken, at the same time, come rain or snow, for twenty solid years. The walk never varied. He paced two blocks down Maple Street, stopped at the Red Star confectionery to buy a Rose Trofero perfecto, then walked to the end of the fourth block on Maple. There he turned right on Lexington, followed Lexington to Oak, down Oak and so by way of Lincoln back to Maple again and to his home. He didn't walk fast. He took his time. He always returned to his front door at exactly 7:45. No one ever stopped to talk with him. Even the man at the Red Star confectionery, where he bought his cigar, remained silent while the purchase was being made. Mr. Chambers merely tapped on the glass top of the counter with a coin, the man reached in and brought forth the box, and Mr. Chambers took his cigar. That was all.
Toon meer Toon minder