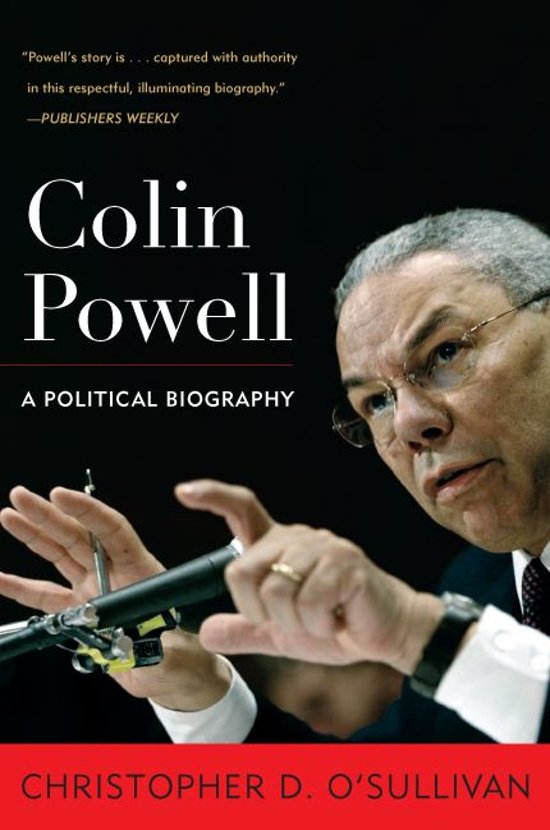 O'Sullivan's work will be of interest to all students of Colin Powell's career and all who are looking at George W. Bush's military policies. * Library Journal * O'Sullivan examines Powell's long career, finding that his loyalty to the Bush administration led him to commit the same sins as military leaders of Vietnam era-not speaking out about an inadvisable war. * Booklist * One of the more tragic political casualties of the latter Bush Administration, former Secretary of State Colin Powell was a powerful voice for moderation who was unable to curb the neoconservative agenda of colleagues Rumsfeld, Cheney, and Wolfowitz. Powell instead became their fall guy, notoriously presenting flawed intelligence to the U.N. portraying Iraq as an immediate threat. . . . Throughout, O'Sullivan keeps his account remarkably balanced, probing the four-star General's remarkable sense of loyalty for the secrets to his meteoric rise and its abrupt halt. Once a powerful contender for the presidency, Powell's story is particularly poignant, and captured with authority in this respectful, illuminating biography. * Publishers Weekly * An interesting and thought-provoking account of Powell's life and times. This small book does more than present a biography of Colin Powell: it summarizes the political machinations of four presidencies and gives the reader a sense of some of the political maneuvering Powell encountered within the White House, the NSC, and the offices of Defense and State. It is interesting, informative, well written, and well sourced. The bibliographical essay alone represents the best example of a literature review I have seen in a graduate thesis or post-graduate dissertation. I certainly recommend this book to anyone interested in US foreign affairs. * American Diplomacy * We have not yet begun to think of Colin Powell as one of those somewhat larger-than-life figures who provide such revealing windows into the history of U.S. foreign policy-Dean Acheson, John Foster Dulles, Henry Kissinger, among others. Christopher O'Sullivan's book makes a persuasive case for now putting Powell into that category and it will serve as the valuable jumping off point for the studies of this important and complex man that many others will want to undertake. -- Ronald W. Pruessen, University of Toronto
Toon meer Toon minder