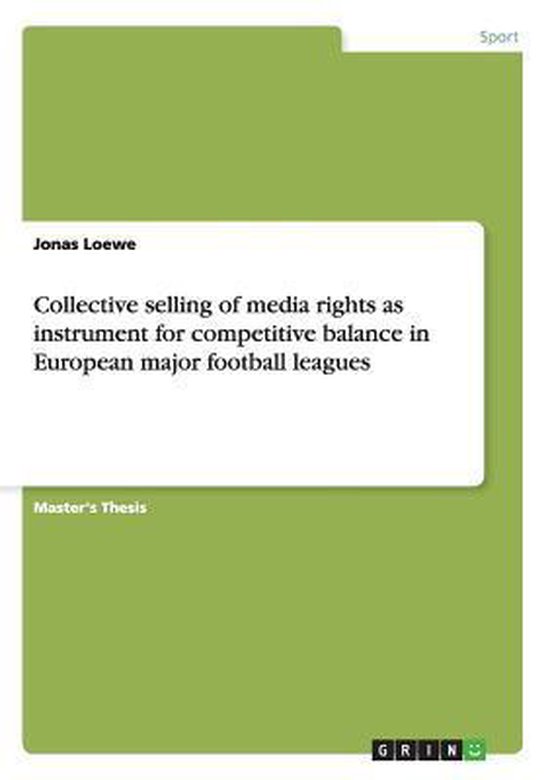 Master's Thesis from the year 2014 in the subject Sport - Sport Economics, Sport Management, grade: 1,7, University of Southern Denmark (Economics and Business Administration), course: Sports and Event Management, language: English, abstract: Current discussions in the business of professional football are dealing frequently with the question if competitive balance is decreasing in the European major leagues. Clubs like the FC Barcelona or FC Bayern Munchen were dominating on a national and European level in recent years. In professional sports a positive helix between financial and sporting power exists. Sporting success implies financial success which can be reinvested in the sporting strength, hence leads to even more competitive power. The key driver for the underlying financial success consists of the revenues generated by selling the clubs' media rights. Two different systems of selling these rights exist, a decentralized and a centralized one. The aim of this paper is to investigate if the selling system of the media rights has influence on the competitive balance in the league. Many different tools to measure competitive balance in team sports exist. For the underlying analysis the Ratio of Standard Deviation, the Concentration Ratio 2 and the Concentration Ratio 5 have been applied. The final rankings of the recent 30 seasons from 1984 to 2013 of six European football leagues have been investigated, the English, Spanish, German, Italian, French and Portuguese league. The data for the analysis was disposable on the World Wide Web. The leagues were analyzed with each measurement tool. The results were presented and evaluated in different steps. In the first step the results of each league were calculated for each measurement tool for the entire investigation period. In the second step the results were sorted and subsequently summarized to one final ranking of competitive balance. By means of this final ranking and the individual analysis results of the league
Toon meer Toon minder