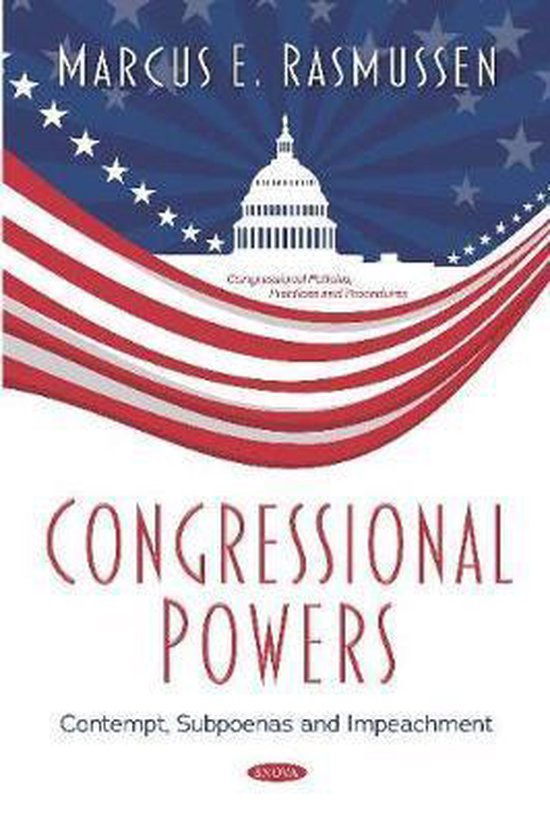 Congress's contempt power is the means by which Congress responds to certain acts that in its view obstruct the legislative process. Chapter 1 examines the source of the contempt power, reviews the historical development of the early case law, outlines the statutory and common law basis for Congress's contempt power, and analyzes the procedures associated with inherent contempt, criminal contempt, and the civil enforcement of subpoenas. It also includes a detailed discussion of two recent information access disputes that led to the approval of contempt citations in the House against then-White House Chief of Staff Joshua Bolten and former White House Counsel Harriet Miers, as well as Attorney General Eric Holder. Congress gathers much of the information necessary to oversee the implementation of existing laws or to evaluate whether new laws are necessary from the executive branch. While executive branch officials comply with most congressional requests for information, there are times when the executive branch chooses to resist disclosure. When Congress finds an inquiry blocked by the withholding of information by the executive branch, or where the traditional process of negotiation and accommodation is inappropriate or unavailing, a subpoenaaeither for testimony or documentsamay be used to compel compliance with congressional demands as reported in chapter2. As reported in chapter 3, the Committee on the Judiciary (aathe Committee'') is currently engaged in an investigation into alleged obstruction of justice, public corruption, and other abuses of power by President Donald Trump, his associates, and members of his Administration. Few provisions in the U.S. Constitution grant the President an authority as free from legislative constraint as the Pardon Clause. While the pardon power has been wielded in numerous instances throughout American history, there is limited case law interpreting it. This lack of judicial guidance has beget various unsettled legal questions concerning the pardon power's scope and breadth. For instance, whether the President may issue a self-pardon has been the subject of conflicting views and debate as discussed in chapter 4. Chapter 5 examines the broad constitutional authority of Congress to establish and shape the federal bureaucracy. Congress may use its Article I lawmaking powers to create federal agencies and individual offices within those agencies, design agencies' basic structures and operations, and prescribe, subject to certain constitutional limitations, how those holding agency offices are appointed and removed. Congress also may enumerate the powers, duties, and functions to be exercised by agencies, as well as directly counteract, through later legislation, certain agency actions implementing delegated authority. The Trump Administration has recently questioned the legal validity of numerous investigative demands made by House committees. These objections have been based on various grounds, but two specific arguments will be addressed in chapter 6. First, the President and other Administration officials have contended that certain committee demands lack a valid legislative purpose and therefore do not fall within Congress's investigative authority. Second, the President has made a more generalized claim that his advisers cannot be made to testify before Congress, even in the face of a committee subpoena. House Democrats have introduced a resolution that, if approved by the House, would formally censure and condemn President Trump for disparaging comments on immigration issues he allegedly made during a meeting with Members of Congress. Chapter 7 will discuss examples of congressional censure of the President before addressing its constitutional validity. Under the U.S. Constitution, the House of Representatives has the power to formally charge a federal officer with wrongdoing, a process known as impeachment. The House impeachment process generally proceeds in three phases: (1) initiation of the impeachment process; (2) Judiciary Committee investigation, hearings, and markup of articles of impeachment; and (3) full House consideration of the articles of impeachment. Chapter 8 provides an overview of the procedures and should not be treated or cited as an authority on congressional proceedings.
Toon meer Toon minder