Contrary Things Exegesis, Dialectic, and the Poetics of Didacticism 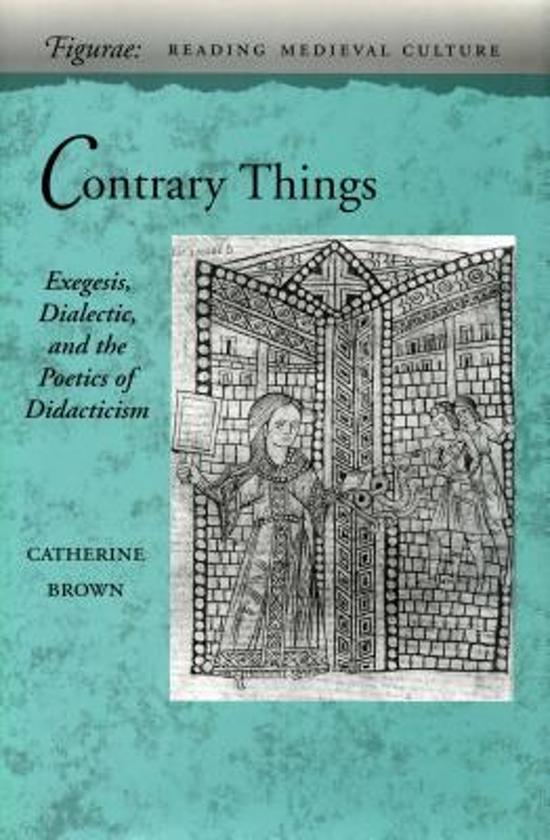 This work of intellectual and cultural history seeks to understand the recurring connection of teaching with contradiction in some major texts of the European Middle Ages. It moves comfortably between patristic and monastic exegesis, the Paris schools of the twelfth and thirteenth centuries, and late medieval Spain; between Latin and vernacular, between religious and secular. It assimilates the methodologies of religious and erotic texts, thereby displaying the investment of each in the sensuality and analytical power of language.The book begins by exploring Christian exegesis, in which biblical contradiction is the textual incarnation of a Truth that is at once and paradoxically singular and multiple. Exegesis teaches us of the possibility of maintaining the truth in one biblical proposition and, equally and simultaneously, in its apparent opposite. Under the aegis of dialectic and the Aristotelian rule of non-contradiction, however, we are next taught to read either/or, and to resolve contradiction not through suspension and multiplicity, as in exegesis, but rather through a judgment that favors either one proposition or the other. The writers studied here are John of Salisbury, whose Metalogicon is an ostensibly moderating critique of the intellectual extremism of the School of Paris logicians, and Peter Abelard, in whose life and writing the forces of contradiction work with maiming and illuminating violence.The book then considers the teaching-textuality of two great secular works of the Middle Ages, formed under the double instruction of the master disciplines of monastic exegesis and dialectic and under the tutelage of Ovid. Calling simultaneously on the both-and of exegesis and the either/or of dialectic, the teaching of these two texts is both biblical and worldly-impossibly, both at once, always in motion. The De Amore of Andreas Capellanus teaches two opposite propositions and commands that either one or the other must be chosen, yet in practice shows each proposition to be deeply embedded in the other. The concluding chapter turns from the Latin to the vernacular tradition to study one of the lesser-known examples of contradictory teaching, the fourteenth-century Libro de Buen Amor of Juan Ruiz, whose titular good love conflates the contrary things of spiritual and carnal love, while reminding readers that the difference between the two is urgently consequential.
Toon meer Toon minder

Contrary Things as a whole instances a new and welcome approach to literary history as intellectual history. -- Modern Philology