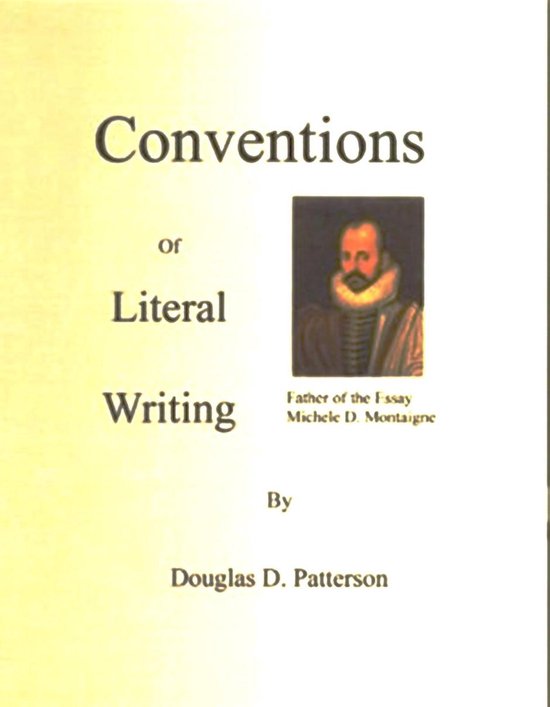 This book is designed for use in English composition courses. It focuses on the generally accepted practices by those writers who attempt to present the unvarnished truth. Unlike the literary writer, one who writes on a literal level does not wish to suspend reality but rather to present his thoughts without literary embellishments. His central purpose is to inform and not to entertain.

I chose to title this book "Conventions of Literal Writing" and its companion book "Conventions of Literary Writing" as a sensible division of the writing genres. The course title "Creative Writing' has always left the unfortunate impression that literal writing lacks creativity. Nothing could be further from the truth. In fact, some of the most creative and imaginative writing is done on a literal level. One has only to look at the works of great scientists to see how creative a literal representation of reality can be. Isaac Newton and Charles Darwin and Albert Einstein, to name only a few, had no interest in word play or in spinning fantasies; yet their creative ideas revolutionized our understanding of the nature of reality.

In this book, I have covered many widely accepted rules of literal writing. These conventions have been developed over the history of writing and publishing, and they are certainly not carved in stone. E-publishing, for example, is currently requiring a considerable revision in the way that author's present their work. Due to the nature of the medium, an e-book can never look just like a printed version of the same book

The writing assignments cover a variety of sub-categories: diaries, letters, reports, essays, etc. They are all structured in terms of the writing process. I provide students with a model of the paper that they are being asked to write and a series of questions to use in analyzing that model. Then I present the assignment along with somewhat detailed instructions as to how to write their own paper. Even though the last phases of the writing process are repetitive, I tag them on to each assignment as I wish to emphasize the importance of this methodical approach. Of particular importance, I require students to make their work semi-public by asking their parents and their friends to review and to react to their papers. There is nothing more important for a writer than to seek and to receive feedback from an audience.

The lessons in the book ask students review the practices and concepts that were presented in two companion books in this series: "Conventions of (American) English" and "Conventions of Thinking." The first book deals with linguistics. The central thrust of the second book is revealed in its sub-title: "An Introduction to Critical Thinking." Becoming a proficient writer requires above all that he become an effective thinker. If a writer's compositions are to achieve acclaim (or even an A+), they must be unified, coherent, original, believable, and significant. If their works follows generally accepted language standards, the readers are less likely to be distracted and annoyed by errors in spelling and grammar and usage.