Cribbage Made Easy Being a New and Complete Treatise on the Game in All Its Varieties: Including the Whole of Anthony Pasquin's [i.E. John Williams'] Scientific Work on Five-Card Cribbage 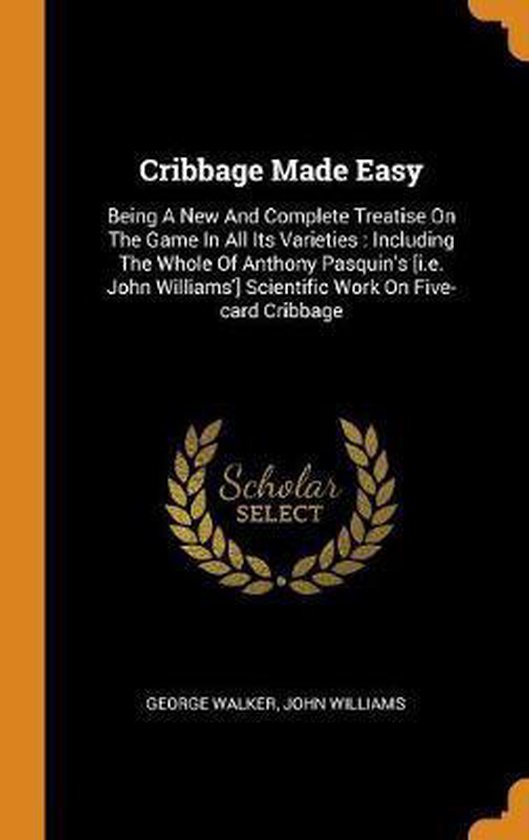 A review from The Philidorian:

As long as sea-coal fires and Welsh-rabbits maintain their ground in merry England, so long will the venerable science of Cribbage hold its own. To the spectacled dowager, or the gouty old bachelor,—to miss near her teens, or master near his pinafore. —How could there be devised a better game? It teaches the child arithmetic, by a railroad process; and soothes the aches of age by its gentle exercise of the brain. Pasquin's Treatise, long out of print, was the best cribbage manual ever published; and in the little volume before us Mr. Walker has appended a good deal of interesting matter to a reproduction of the original. We may take another opportunity to draw upon this work for extracts. At p. 41, we turned up an error, which the publishers will thank us for pointing out, in order to its being corrected in a second edition. The author's words are, ''A sequence of a six, seven, and eight, combined with a pair of aces, inclusive of a four card flush, yield thirteen points,'' &c. Now the fact is, these cards with the flush, as indicated, count for seventeen, although at first view we grant the computation is not obvious. A six, seven, and eight, with a pair of aces, unflushed, form of themselves the baker's dozen; and this particular presentment of the cards is called, in some counties, the ''ragged thirteen.''

From the beginning of the Author's PREFACE:

As a game of cards for two persons only, Cribbage is universally popular, and both Piquet and Ecarté must give place to its pretensions. There exists, indeed, no similar species of amusement, in which the rival powers of chance and skill are so happily blended; — and, while the influence of fortune is perpetually recognized as a source of pleasing excitement, there remains sufficient room for the exercise of the intellectual faculties, to insure their final attainment of success. In Cribbage, as in other games, the ignorant go on, playing at random, and trusting solely to what they term ''their luck;'' — while those who are better informed, do not disdain to acquire the art of guiding that ''luck'' towards their own side of the board. During the run of a few consecutive games, skill may be compelled to yield to the power of adverse cards; but in a longer series of play, its influence will most certainly predominate.
Toon meer Toon minder