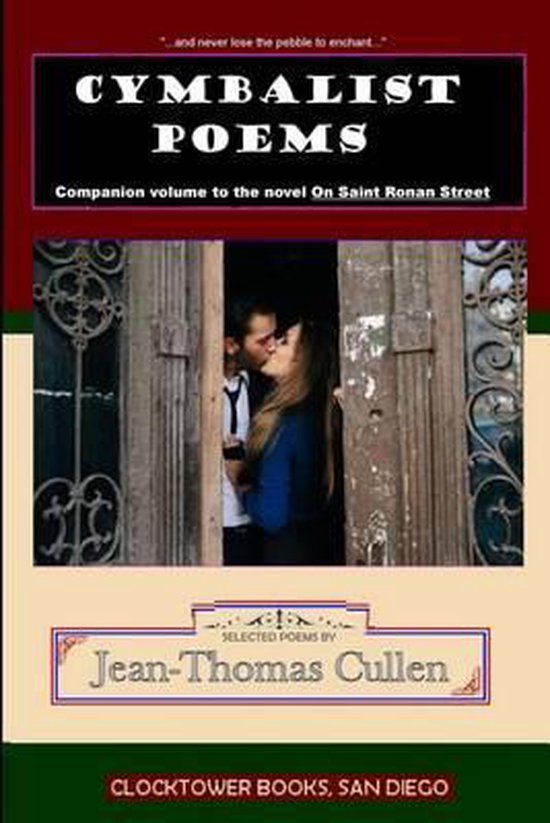 Cymbalist Poems is a collection of the author's favorite 64 poems from among hundreds he wrote during a youthful career of great passion, technical skill, and esthetic taste. He was a published poet by 18, began summarizing his life's poetry in his mid-20s while living, working, and traveling in Europe (1975-1980), and reached his "27" in 1976. That is the age when rock stars famously flame out. It is no different with lyrical poets (e.g., Arthur Rimbaud, Rainer Maria Rilke, and many others). In a remarkable twist, the author also wrote a passionate, exciting novel around age 27--his first adult novel, set in a New England college town (shades of John Updike )--dealing with the fiery love affair between a struggling but courageous young poet and a beautiful young married woman. She is a faculty wife, married to a man who is never there for her but is always absent without emotional leave. As the novel transpires, her husband is on an archeological dig far off in Australia, where he is also digging the chicks. In fact, in their back and forth marriage, he calls to tell her he is leaving her for another woman, before he calls to tell her he isn't. While the novel was written in 1976, retrospective to an already lost world of 1973, the manuscript was all but forgotten for 40 years and resurrected in 2016. Remarkably, the story remains as fresh today as it was then. This is a youthful novel by a 27 year old author, writing a not only about the agonies and ecstasies of his own ambitions as a poet, but also a kind of loving and symphonic tribute to the city (New Haven) where he grew up which is forever gone from his life, but also a glowing and sensual retrospective on a swirling mosaic of fictional and perhaps remembered love stories from his own amorous life with attractive and brilliant young college women. The amazing coup that follows is this. The novel, and the author's final book of poetry, traveled on separate paths for forty years. With the publication of the novel, it was not until galleys that it occurred to the author that he must absolutely include some of his own poems from long ago--to validate the struggles of the novel's hero, a fictional character named Jon Harney, who wishes to stay modestly anonymous, and therefore writes in the pseudonymous persona of a fictional Russian emigre named Charles Egeny. Shades of Vladimir Nabokov, Jon tells Merile as they lie in bed together one night. Thus, after separate journeys of 40 years, the two books (novel and poems) have clicked together, and a whole brilliant new set of lights have sprung to life--a perfect union, like that of Jon and Merile (except... well, please read the novel to find out what happens). And enjoy the poetry. The two books are a matched set that found each other, like two long-lost lovers, and begging for you to enjoy them. On a separate note, the poetry collection spans primarily twelve years and is organized to describe a trajectory in life. In real life, the poet spent his childhood in Europe but grew up in Connecticut, which he passionately documented through his college years at the University of Connecticut and his early adulthood in New Haven. He writes the final poems as a soldier stationed in Europe, where he enjoys travel to Paris, Brussels, and other great places--but always returns to the barracks to type all night while listening to Mozart and enjoying fine beers and wines. In the end, the trajectory brings him to San Diego and the women he married, with whom he finally found the love he sought, and has enjoyed for over thirty years to this day.
Toon meer Toon minder