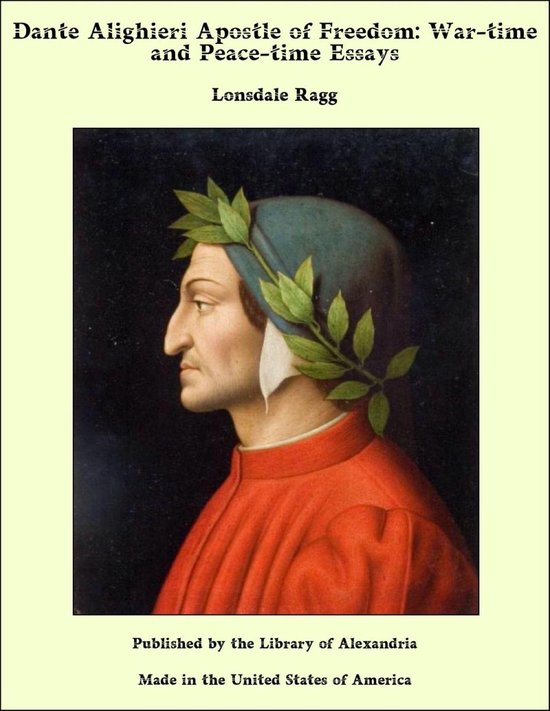 Amid all that has been said and written this year about the author of the Divina Commedia, there is one note that has rarely, if at all, been struck; yet it is surely, in some sense, the keynote of all his singing. Dante is, from the first and to the last, the poet of Love. "I am one," he says, "who, when Love breathes in me, take note, and that which he dictates within I express"—I' mi son un che quando Amor mi spira, noto, ed a quel modo Ch' e' ditta dentro vo significando. His first book—the Vita Nuova—testifies to this. It represents a new movement in love-poetry. The songs of the Troubadours had been, in their earlier forms, with all their strange beauty, frankly sensual and immoral; and when, after the religious movement of the Albigensian Crusade, a greater strictness had perforce been introduced, they had lost their first warmth and glow and naturalness. The "sweet new style"—Dolce Stil nuovo—of Dante and his circle combined the two requisites of sincere purity and glowing life. The story of the Vita Nuova is the story of the precocious passion of a boy of nearly ten years old for a little girl of nine. It passes through its phase of refined sensuousness and self-absorption, but it emerges as a pure mystic love that leads ultimately up to the very Throne of God. In the vision with which the book closes—the vision of his Beatrice after God has called her to Himself—lies the germ of the greatest poem of Christendom; the poem which, just because it sings the story of man's freewill in contact with God's redeeming grace, has as its supreme and final theme—Love. We are familiar, no doubt, with the main lines of Dante's vision of the world beyond—of the three kingdoms as he conceived them, of hell, purgatory, and heaven. But I will ask you to be patient if I attempt to sketch for you something of the great contours of each, that we may see together how, for this love-poet, eternal Love dominates and shapes the universe. His world beyond is conceived in terms partly belonging to the age in which he lived, with its scholastic theology and its Ptolemaic cosmography, partly in terms of the originality of his own genius. Its details and its hard outlines may be largely obsolete; but its lessons are true and effective. It is because of its essential Christianity that Dante's poetry is so much alive, is more "modern," as the Papal Encyclical put it, than much actually contemporary poetry that is conceived in the spirit of paganism. Dante, for his soul's health—and for the benefit of untold generations—must needs pass through all three kingdoms of the world to come, guided by Virgil, who represents human reason. Descending down and down into the very bowels of the earth he sees the doom of unrepented sin. Then, after a wearying subterranean climb from earth's centre to the antipodes, he emerges at the foot of the lofty terraced mountain where repentant souls are cleansed and brought back to their primal innocence. At the top of this mountain he finds himself in the earthly paradise, and meets Beatrice, the glorified "lady of his mind," who now represents at once Revelation and Grace; sees wondrous things, submits to mystic rites, and finally is drawn up side by side with her, by the motive power of Love, from sphere to sphere, up to the Throne of God, where the redeemed worship Him for ever in the form of a mystic white rose. That Love is the motive power in Paradise is obvious. It is the radiant beauty of Beatrice, ever more dazzling as they mount higher, that lifts him up, and the spirits he meets glow one and all with the fire of Divine charity. It is not easy, perhaps, to detect the influence of Love in the dark abyss of the Inferno, or in the stern, long discipline of the Mount of Purgation.