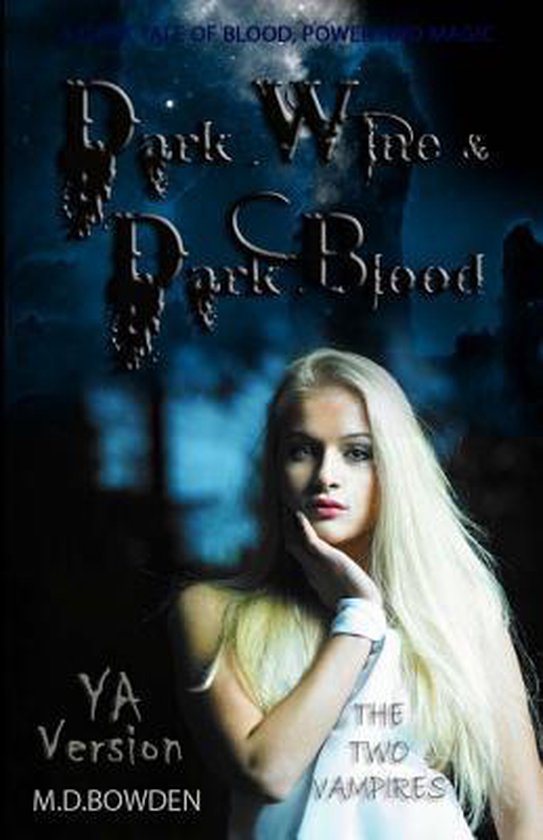 A DARK TALE OF BLOOD, POWER AND MAGICRomantic, compelling and brimming with sexual tension, 'Dark Wine & Dark Blood' (The Two Vampires, Books 1 & 2) will imprint on your mind and leave you with a thirst for more.Sarah lives in a small Canadian town with her two daughters. When her husband disappears the same night she meets a beautiful and charismatic man her world is thrown into turmoil. What has happened to Jo? Who is this sexy mysterious man? As Sarah tries to answer these questions her life takes a dangerous turn. . . The Two Vampires:Dark WineDark BloodDark LoveDark MoorsContains romantic scenes, passion, and moderate violence; aimed at readers of 14+ years.Extract from 'Dark Wine, YA Version'Jo came awake slowly. He was faced with dappled green and brown light and he was confused. His throat hurt and his head felt fuzzy. He was very, very thirsty. Where on Earth was he? What was going on? In his sleepy haze he thought back to the previous night. He had been going to see his sister. He remembered leaving the house, then some weird visions; vampires and bats and the quarry. He remembered the bat turning into a man. A VAMPIRE. The vampire had snapped his neck. Oh God. He gasped and sat up straight, opening his eyes as he did. He was alone in the woods. He had no idea where or how he'd gotten there. Oh, my throat. He really needed a drink. Looking about he saw trees in every direction. It was daytime but only a little light shone through the branches, even though many leaves littered the forest floor. It must be early morning. He wasn't cold but his eyes hurt, especially when he looked at the light. His skin felt itchy. He needed something. Water. He listened hard and thought he heard trickling nearby. Jo pushed himself to his feet, stumbling, searching for water. After about two-hundred meters he found a small stream and scooped up some water to drink. He sucked it up but it tasted cold and foul. It didn't quench his thirst at all. He turned, seeing someone approaching; a dark man dragging a mute girl by his side. The man looked familiar. Then, with a jolt Jo realised it was the man by his car last night. The man who had snapped his neck. The man who must have killed him. However, he felt no anger towards him, he actually felt strangely attracted. Jo rose and walked towards him. His hair was long, for a man, and his eyes were black. He was tall, about 6'4'', with a lean frame. The girl with him looked small and fragile, with red hair and a dainty neck. It looked exquisite. He could see thin veins exposed as Sebastian pulled her head to the side. Jo walked forward fascinated, he reached out his hand and stroked her neck, and then he was overtaken by desire to quench his thirst. He grabbed her round the waist, yanked aside her head by the hair and felt his teeth lengthening as he sank them into her fine neck. And he drank. Drank for his life. Or his death. The girl's warm blood flowed from her veins down his throat giving him life. He could feel its power rushing into him. Rejuvenating his cells, making his heart race and his senses come alive. His sense of smell came into focus and he breathed in the smell of the girls' blood as he took her life, then released her and she fell to the floor. Slumped, dead, pathetic and used. Wiping his mouth he staggered back and leant against a tree, new sensations overwhelming him. He could feel every inch of his body come into acute awareness. He could feel the redheaded girls' blood travelling to the extremities of his body, rushing through his veins to his internal organs, his brain and even his toes. As it reached his soles he could feel the earth beneath his shoes and his connection to the ground and the trees. . .
Toon meer Toon minder