Degsy Hay - A Redeemed Juvenile Everybody Deserves A Second Chance 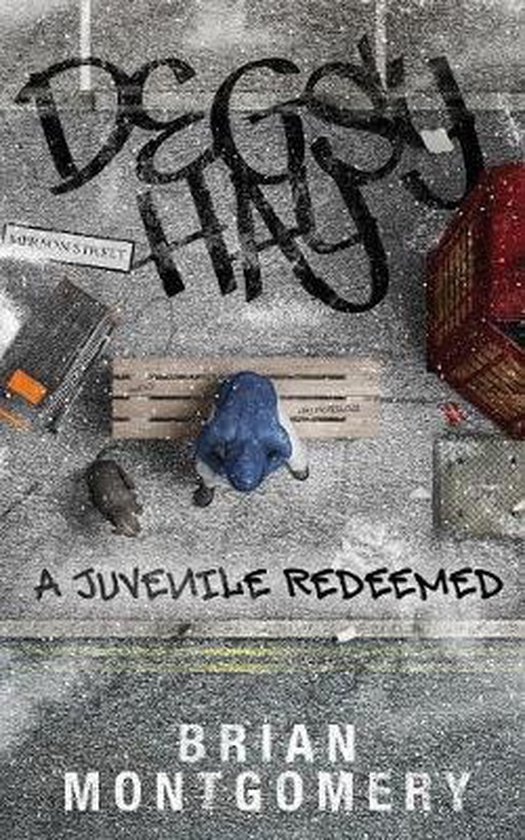 Sixteen-year-old Degsy is roughing it on the snowy streets of London with no one for company but Sadface, the three-legged dog he saved from the bins. He's spent his whole life in and out of jail, rising to power as the gaffer, dealing, cracking skulls, but he always looks after his own and those who can't look after themselves. He learnt that from Gladys - the little old lady whose life he saved when he was a kid - and from his violent, drug-addicted mum, who showed him exactly what it feels like to be powerless and alone. He was cut from her belly, kicking and screaming, in a prison cell and spent his first four years there in hell. It was tough - he has the scars to prove it - but he has no idea how tough until he finds her diary: The Devil's Book. Her cheerful boasts of violence, humiliation and torture leave him breathless. Then her evil scrawl gets darker still, and sexual, and just as he is about to discover the full horror of his childhood, he finds that the pages he needs to read are missing. But he must look forward now. He's determined to keep his nose clean. He can't go back to prison, not again. He wants to make a better life for himself. And he wants to help others, too: kids in gangs, like he was, the homeless, the elderly, like Gladys - he can't bear the thought of them getting beaten up or feeling like prisoners in their own homes. He has a vision. He wants to turn an abandoned school and hospital into a housing project for young people - Unit 16-21. It will cost millions of pounds, and he can't even afford a bag of crisps, but it's a dream that keeps him warm at night (along with hooch, weed and the pills that the vet gave him for Sadface's injuries). He wants to change the world ... but the world has other ideas. See, he takes on a final job to score a little cash - dumping a scooter for the TWC, a gang with a reputation for violence and connections to a mysterious crime lord with eyes, ears and guns on every corner: MR-K. It turns out the scooter was used to mow down a copper, and members of the TWC take photos of him dumping it. Now he's just waiting to be arrested for a crime he didn't commit. And then there're the kids to worry about: more and more missing kid posters are pasted all over London, and when his mate, Dipper, goes missing, he knows that it's a problem he can't ignore. As Degsy searches for the truth about his past, the whereabouts of the missing children and a better way of life, losing the game of cat and mouse with street predators and the police, he is slowly drawn back into a world of trouble that he will be lucky to escape with his life intact. But Degsy's is a story of transformation and redemption, of strength and hope, of holding onto an impossible dream and watching it become a reality ... no matter what the cost.
Toon meer Toon minder