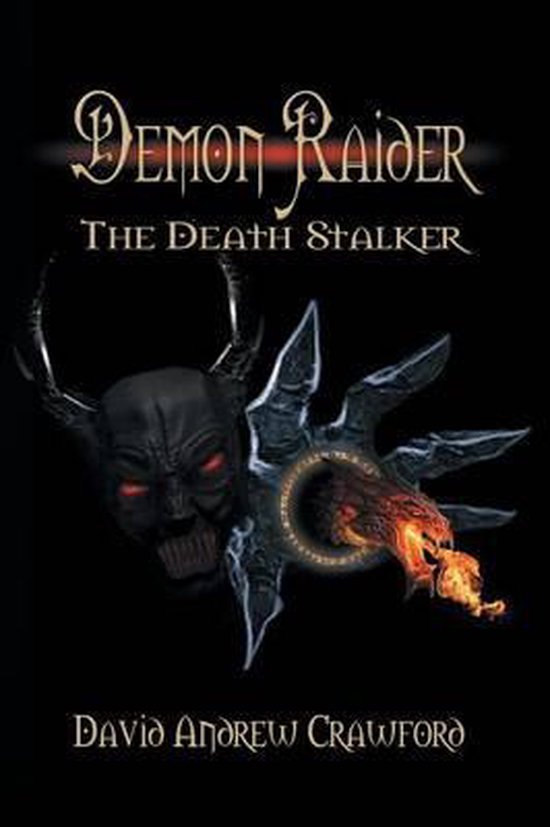 Now with the first leg of his quest over, the second book, Demon Raider the Death Stalker, starts out with Dark finally finding himself in the Dwarven City of Duergar, an instrument of revenge, seeking redress for wrongs done to him and his family as he begins to set his plan for vengeance in motion. Aided by the powerful artifact, the Eye of Dagda, he enters the city under the guise of Giacomo, the Jester and sets out to destroy the Halflings' Guild and its leader Sneak Longfoot, the Grand Master of the Guild. Dark, using all his skill as an assassin and his powerful arsenal of magical items, causes murder and mayhem throughout the fortified City of the Dwarves. One by one the leaders of the Guilds and their followers will pay for the injustice carried out to his parents. Then and only then will Dark have peace in the knowledge that his parents have been avenged and all those responsible have paid with their very lives. Darkness will fall upon the Kingdom of Duergar and one lone assassin will rise up against the sinister forces who have gone, as of yet, unpunished. On his quest for vengeance, Dark must face his first of many terrifying tasks that poses as much risk to himself as it does to his target. Any doubts he may have he will bury with the dead as he puts into play a plan that will have him hunt down his numerous adversaries and in the end his shadowy blade will drip with the blood of his enemies. Only there is one slight problem with his perfectly laid plan. For starters, the Dockalfar, a dark skinned sub-race of the Elves have entered into his one man war, and bringing with them their hated and sworn enemy the Elven Witch Slayer's of Eldred to resume their age old conflict. With the aid of the Dark Elves and the Lycans, Kalifen begins conspiring to establish a New World Order under the control of the Illuminati and the one true god, the Shadow Lord. Having obtained the first two evil relics of the Lich King, Shaddai Var, the Fleshweaver, will arise, and through his knowledge and use of the dark arts of a Necromancer, to summon the spirits of lost souls and amass an army of undead, the likes of which the mortal world has never seen before. This book is action packed with ancient secret rituals, black magic and secret societies where prophecy and divination collide...inside are pages filled with werewolves, vampires and a seventy foot zombie, Oh My...OH MY "
Toon meer Toon minder