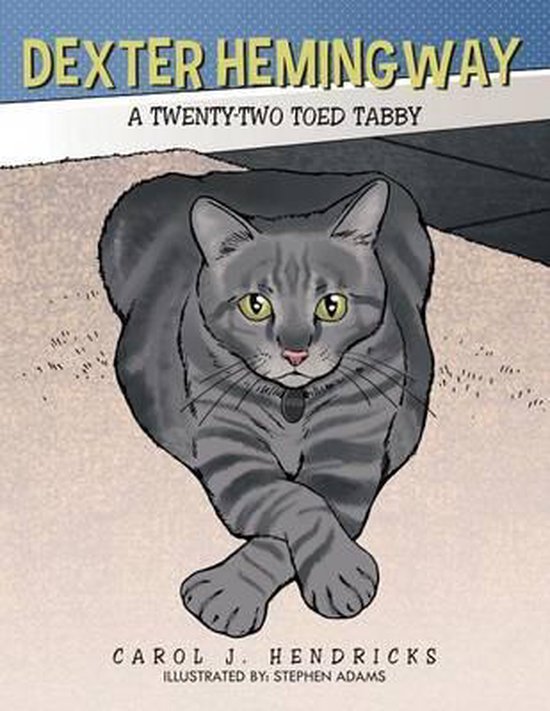 Dexter Hemingway: The Twenty-Two Toed Tabby was an idea I played with after taking a children's writing class at UCLA. My first attempt was to just write a story which I sent to a few magazines. I soon realized that merely hearing a short story wasn't enough and a children's book would be perfect. It became a rhyming story, but was also completely non-fiction. It all began when I took a trip to our family's orange ranch in Woodlake, California. It was a place I could go to in the country and just enjoy the scenery. I also hoped to find a silver and black Tabby kitten for my daughter. I went through all the ads in the paper, but the few I found would not be ready for adoption for two weeks and I would be gone by then. However, one woman told me about a place in another small town where a woman was suppose to have 800 cats. I didn't believe this, but got her name and talked to her on the phone. She wanted to be sure if I adopted a kitty that it would be taken care of properly. After our conversation she gave me directions and I went to a small town about 40 minutes away. She had a home on the Kings Canyon River and once I said hello and she let me in I no longer doubted that she truly did have 800 cats. Cats covered every counter and piece of furniture in her home. There was an infirmary for sick kittens and cats, two rooms with kittens ready for a home, an old house near the river where feral cats lived, and a few hundred more running all over. She gave me a tour and then I could go into each room and decide which kitten would go home with me. It was impossible to choose until one came flying from a cat tree right onto my lap. Of course, it was a silver and black Tabby. He had chosen me and as we left she told me he was a ''good luck cat'' because he was a polydactyl. His paws were perfect, but each had an extra toe. The kitten was quite sick and very nervous. He still takes medication at five years, but he is a wonderful big male cat. I hope a child will not only be entertained, but realize being different can be just as wonderful as not being a normal child. Perhaps even more special.