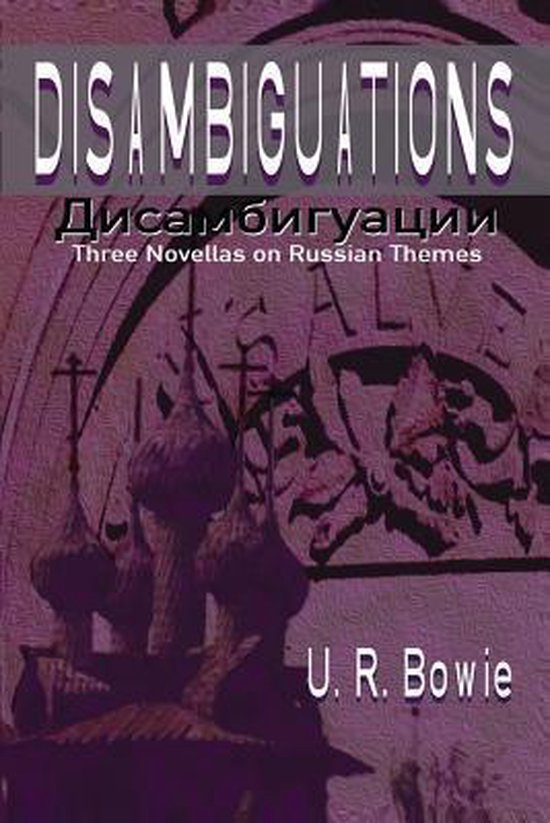 U.R. BowieDISAMBIGUATIONS: THREE NOVELLAS ON RUSSIAN THEMESU.R. Bowie holds a Ph.D. in Russian literature. The three tales included here are written in English, but make no mistake: they are firmly in the tradition of Russian literature. In fact, the great Nikolai Gogol, with what the critic Mirsky once called “his volcano of imaginative creativeness,” blows through all three works, both in body and spirit.The first novella, ''Exhumation,'' features Gogol in the flesh (and then out of it). Beginning with scenes from the writer’s life in the nineteenth century, it goes on to describe the macabre little festivities on the summer day in 1931 that Nikolai Gogol, along with some of his closest friends, was dug up at the Danilov Monastery in Moscow. When they opened the coffin they discovered that the skull was missing. Nikolai Gogol’s head had been stolen. The second novella, ''Disambiguation,'' is set in the United States, but the theme, once more, is Gogolian in its skewed intricacy. A man who may or may not be insane, who may or may not be Lee Harvey Oswald (still alive fifty years later) appears on a Philadelphia talk show, where he discusses the ambiguations and disambiguations of the spy world, and of the Russian mind— and, by extension, the labyrinthine thing that is anyone’s life on earth.The longest, and most purely Russian of the three works is the last, ''The Leningrad Symphony.'' Set entirely in the city of St. Petersburg, on one day in October of 1999, it is structured something like Virginia Woolf’s ''Mrs. Dalloway.'' While Shostakovich’s famous Seventh Symphony (The Leningrad) plays in the background score, the reader listens to the music and follows a wide variety of characters about the city: a government official on his way to being murdered in a hit killing, his driver, his secretary, his bodyguard, a twelve-year-old boy skipping school that day, an elderly man who spends all his time researching a painting at the Russian Museum, a scatter-brained pilgrim woman, in town to visit the shrine of St. Petersburg’s most famous holy fool, and a variety of other characters.''The Leningrad Symphony'' is a hymn of praise to the resplendent city of St. Petersburg, to its Pushkinian harmonious brilliance and to its Dostoevskian bleakness and sleaze. But, then again, this whole collection sings of that glorious thing that is Russian culture. It even throws in for good measure bits and pieces of the Cyrillic alphabet. While acknowledging the complexity of a thousand bloody years of Russian history, while describing with confidence the Russian propensity to hold two contradictory positions at the same time, U.R. Bowie gives us a totally convincing, and even loving, look at the enigma inside a conundrum inside a puzzle that is Russia and the Russian mindset.
Toon meer Toon minder